Westchester County lawmaker Vedat Gashi will be facing incumbent Congressman Jamaal Bowman in NY State’s 16th Congressional District in the democratic June 23 primary. The 16th district which was formerly represented by Jewish congressman Eliot Engel includes the northern Bronx and the southern half of Westchester County, including the suburban cities of Mount Vernon, Yonkers, New Rochelle, and Rye, as well as the New York City neighborhood of Co-op City.

Gashi is currently serving his second, two-year term on the Westchester Board of Legislators.


In May 2021, Bowman supported a bill that would have imposed limitations on US military aid to Israel. He explained that the bill calls for “more transparency in terms of how the aid is being used, particularly with regard to the detaining of Palestinian children.” The bill was supported by J Street and IfNotNow, and, indeed, Bowman noted that “My decision to sign on to this bill was not in a vacuum. It was made in consultation with many within the Jewish community within the district who also supported the bill.”

Last February, Bowman dropped his support for a bill he had originally co-sponsored, the bipartisan Israel Relations Normalization Act. He sent a letter to his constituents, saying he had reconsidered his decision in light of his trip to Israel in November that was sponsored by the left-wing group J Street, where he “met with Israeli and Palestinian leaders.”

In both instances, Bowman remained loyal to the squad’s anti-Israel, pro-Palestinian ideology.

Gashi, a “Biden Democrat,” said he would stress Bowman’s votes that were out of step with the beliefs of the district’s constituents, including his decision to withdraw his support for the Abraham Accords, and said, “I think the views he has taken … it’s a problem. And it’s a problem for American national security.”

He was also offended by Bowman’s ties with the Democratic Socialists of America, which has endorsed the Boycott, Divestment, and Sanction campaign against Israel. “My family fled Kosovo, which was a socialist country, so we are not very fond of it,” he said.

Gashi was born in Kosovo (formerly Yugoslavia) in April 1978. At the age of 4, he and his family fled to the United States. The Gashis first moved to the Bronx and later put down permanent roots in Yorktown. Vedat Gashi is one of five children, four of whom reside in Yorktown. 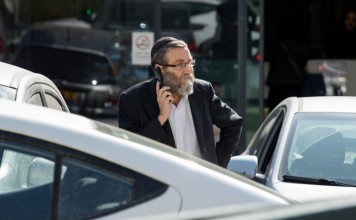