Believe it or not, Blue&White Chairman Benny Gantz and Prime Minister Benjamin Netanyahu are still negotiating, despite the fact that President Reuven Rivlin revealed Sunday that in a conversation with Netanyahu, the prime minister would not confirm that the two parties were close to signing an agreement.

According to Reshet Bet Radio, a proposal has been discussed between the two parties early Monday morning, according to which Gantz would pledge to go to new elections should the High Court of Justice disqualify Netanyahu from becoming prime minister on account of the three criminal indictments against him. So far, the High Court has refused at least three times to debate the issue, saying it was still only hypothetical. But Netanyahu is well aware that things hypothetical have a way of turning tangible very quickly in Israeli politics.


Also: Likud will give up on the idea of new legislation to change the makeup of the Judicial Selection Committee, in exchange for a clause in the coalition agreement that states that both parties must agree on the appointments to said committee.

Next time you choose between voting Likud or Yamina (whatever their new name will be by then), remember this moment. Bibi is quite content to let the court slip back into the hands of the left, because Bibi is not a rightwinger. Oh, he wants the votes of rightwingers, for sure, but he wouldn’t lose sleep if a hundred settlements are decimated as long as he continues to get those photo ops with Presidents Trump and Putin.

So Blue&White is giving him that one: in exchange for taking over the Justice Ministry and the Judicial Selection Committee, they’re prepared to state that Gantz would not be eligible to serve as prime minister in the event that the High Court refuses Netanyahu the post, and that in such a situation they would go straight to a fourth election.

Both sides say their goal is to reach an agreement on Monday but are refusing to confirm or deny any of the above regarding the disqualification clause and the judicial appointments clause. For certain, the main dispute continues to be about the rotation: how to guarantee that Bibi would step down in 18 months. Like two bank robbers after a heist, neither one trusts the other with the loot. 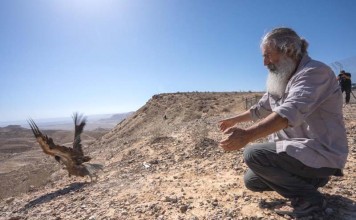