A delegation from Hamas and an Israeli arrived in the Egyptian capital Cairo on Wednesday to discuss the possibility of reaching a preliminary agreement on the broad lines of a prisoner exchange deal, Al-Quds reported.

Al-Quds quotes anonymous sources that said the Hamas delegation includes at least one military figure from the leadership of the Al-Qassam Brigades—the movement’s military wing, and has arrived from the Gaza Strip to Cairo through the Egyptian border crossing.


According to the sources, the leadership of the Egyptian intelligence service will hold separate meetings with the two delegations, noting that the Egyptian leadership at the political and security level is concerned with completing this case, which will contribute to reaching a deal that includes a comprehensive calm for several years.

The sources indicated that the Egyptian efforts in this regard will continue despite the great obstacles it faces, in light of the conditions each party has set before reaching an agreement on the exchange deal, which will include the bodies of two fallen Israeli soldiers as well as two Israeli civilians who are being held by Hamas.

The sources pointed out that there are efforts by other parties, including the United Nations, Germany, and Qatar, to insure the success of these efforts, which aim to restore complete calm to Gaza and improve the economic situation of its inhabitants.

Israeli sources confirmed Tuesday evening and Wednesday morning that a delegation left Tel Aviv to Cairo, headed by Yaron Blum, coordinator for negotiating the return of POWs and MIAs, to discuss the possibility of a deal.

Meanwhile, Jordan has sent two helicopters to Ramallah, to pick up PA chairman Mahmoud Abbas for a meeting with Jordanian King Abdullah II in Amman. The two discussed the “latest political developments in the PA arena, bi-lateral relations, and issues of mutual concern.” 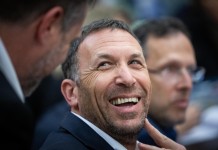