Emirati vocalist Hussain Al Jassmi has just posted a new song for Ramadan on May 26, 2017 that presents a vision for peace which shines with the hopes and dreams of more than half of the entire monotheistic universe.

U.S. President Donald Trump could not have done better himself in writing the anti-terrorism message for this one. In less than a week, the song has attracted nearly four million hits on YouTube, sung in Arabic and presented with English subtitles.

“I will tell God everything,” sings a small child as a radical Islamic terrorist carefully prepares his suicide vest.

“That you’ve filled the cemeteries with our children and emptied our school desks, That you’ve sparked unrest and turned our streets to darkness, And that you’ve lied. God has full knowledge of the secrets of all hearts.”

With that, the small child’s voice vanishes. The deep voice of a terrorist, who is seen stalking down the aisle of a bus he has bombed, sings,

“I bear witness that there is no God but Allah.”

Answers one of his victims, an older man holding a crying baby:
“You who come in the name of death, He is the Creator of life.”

“I bear witness that Muhammad is the messenger of God,” sings the bomber.

“The forgiving and forbearing hurts not those who hurt Him,” responds a child in the bus.

The scene moves from the bus to the site of an attack on a wedding.

“Allahu Akbar.
“God is Greater,” sings the bomber — and the groom.
“Than those who hide what doesn’t show,” respond his victims.

“God is greater,”
“Than those who obey without contemplation,” sing children at a bombed school.

“God is greater,”
“Than those lurking to betray us,” sing men leaving a bombed-out mosque.

Scenes stream by, of bombing attacks by Al Qaeda and Islamic State (ISIS/Da’esh) in Al Karrada, at the Imam al-Sadiq Mosque in Kuwait, at the wedding of Nadia Al Alami, a bride in Amman, Jordan, and an attack at the Dr. Sulaiman Faqih Hospital parking lot in Jeddah.

The fearful suicide bomber is now pursued by his smiling, singing victims.
Led by Hussain, they sing:
“Worship your God with love,
With love, not terror.
Be tender in your faith,
Tender, not harsh.
Confront your enemy with peace, not war.
Persuade others with lenience,
Not by force.”

A framed sign comes into focus: ‘Let there be no compulsion in religion‘ and the camera then flashes for a moment on an older religious man speaking to a younger secular man. Were it not for the Emirati clothing, one could easily think the conversation was taking place at the Western Wall, perhaps between a Chabad emissary and a young Jewish college student. It wouldn’t be a stretch.

A two-second cutaway to a beautiful bride, praying gently, and then children smiling as they once more confront this evil, troublesome bomber.

He hangs his head, hunches over, holding the detonator switch, sweating.
Then, fireworks burst in the evening sky.
The scene dissolves to a wedding.
“Let’s bomb violence with mercy,” Hussain sings.
“Let’s bomb delusion with truth.

A groom kisses his bride on the forehead.
“Let’s bomb hatred with love.”

A bride appears, along with a photo of Nadia Al Alamia, whose wedding was destroyed by terrorists in Amman.
“Let’s bomb extremism for a better life.”

Beautiful children are seen smiling and singing.
“We will counter their attacks of hatred with songs of love.
“From now until happiness.” 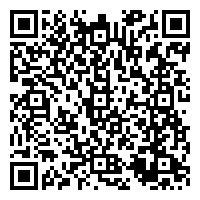