The most significant upgrade in Hezbollah’s military capabilities lies in its missile and rocket launching capabilities, warns a report just issued by the High Level Military Group. It explains: “These have increased tenfold since the 2006 war, and present a threat few countries, much less sub-state organizations, on the globe can mount. Israeli intelligence estimates put the number of projectiles in Hezbollah’s possession today at well over 100,000. The majority of these are short-range rockets, but thousands have a much larger range, up to 150 miles and more. Thus, not only has the sheer numeric scale of the threat increased exponentially, but the lethality is greatly increased on account of larger payloads, range and higher targeting accuracy. Hezbollah also mounts a greatly expanded intelligence effort. It has numerous intelligence-gathering units focused on Israel, generating an extensive bank of targets, including many vital and sensitive Israeli infrastructure facilities.”

HLMG, which consists of military leaders and officials from NATO and other democratic countries, was formed in early 2015 to explore the challenges of 21st Century warfare. This October, the group has issued an alarming report about the capabilities of Israel’s staunchest enemy, Hezbollah, which HLMG considers to equal the military capacity of a modern state.

“The Lebanese group created by Iran is the epitome of what a terror army can be,” writes Rafael L. Bardaji, director of the Friends of Israel Initiative, in his forward to the report which is titled, “Hezbollah’s Terror Army: How To Prevent A Third Lebanon War.”

“Hezbollah is a sort of state inside the Lebanese state, accumulating more rockets than many European armies,” writes Bardaji. “But it is an irregular army since terrorist tactics are commonly employed, and terror as a strategic weapon is used without restraint.” Nevertheless, “Hezbollah has the political clout of a government, the firepower of an army and the strategic approach of a terrorist organization. That’s why the group presents such a threat to the Lebanese State, other populations in the region (as seen in Syria), and to Israel. Indeed, its threat extends to the Western world in general, given the proven global reach of Hezbollah.”

According to Bardaji, since the last war between Hezbollah and Israel in 2006, which delivered a severe blow to the terrorist group, “Hezbollah has been able to recover militarily, amassing a huge stockpile of weapons, developing and fielding new and more precise and lethal systems, and gaining combat experience fighting for Iran and Bashar al Assad in Syria.”

Bardaji cautions that while “there is nothing predetermined in strategic life,” the new configuration of forces in the Middle East could “lead to a new war that, because of the regional dynamics and new security imperatives, will be much more violent and destructive than the previous ones.”

“Hezbollah’s main fire power is based on a huge arsenal of rockets and missiles,” notes the HLMG report, pointing out that “although Hezbollah does not have a conventional air force nor navy, it does have advanced capabilities both in carrying out aerial warfare campaigns using Unmanned Aerial Vehicles (UAVs), and for conducting warfare against naval assets.

“Hezbollah’s ground forces are equipped with AK-47 assault rifles, night vision goggles, and advanced anti-tank weapons. Its combatants are highly skilled in deploying explosives and anti-tank guided missiles (ATGM). The combat experience acquired in Syria and the vast increase in numbers also give Hezbollah an ability to maneuver and carry out relatively large-scale ground attacks at the scale of company or battalion level.

“Its forces have also benefited from tactical improvements and a new armored support unit consisting of modern tanks and Armored Personnel Carriers (APCs). It also now possesses hundreds of UAVs, with surveillance and in some cases munitions capabilities, as well as advanced air defense systems and significant capabilities for naval warfare based on coast-to-sea cruise missiles.”

The HLMG report deals with Iran’s substantial role in the development and empowering of Hezbollah, pointing out that as Hezbollah’s involvement in Syria deepened, so have supply lines between Iran and Hezbollah become even more tightly integrated. The report points to last summer’s revelations that Iran is facilitating the establishment of weapons manufacturing sites in Lebanon, with additional activity of a similar nature likely taking place in Yemen.

“Such advances amount to a gravely serious change in the military capabilities that Hezbollah is able to generate, and have the potential to significantly affect the strategic balance in the region by enabling Hezbollah to produce more precise long-range missiles without risking their detection in transfer,” says the report.

In conclusion, given the obvious interest the international community and Israel (and the people of Lebanon) have in averting a regional holocaust, the HLMG report calls for urgent steps to de-escalate the tensions on the border between Israel and Lebanon.

The report also urges “a clear recognition of the geopolitical ambitions of Iran. Its religiously motivated imperialism and its pursuit of Israel’s annihilation is the core driver of the problem and must be addressed as its root. The international community must take actions to curtail Iran’s activities, raise the cost of its behavior and engage in efforts at deterrence.”

“Finally, the West should strongly support Israel in its efforts to de-escalate the tensions,” says the report. “There is no plausible legitimate explanation for Hezbollah’s efforts to arm itself and threaten Israel other than the explicit religiously motivated Iranian drive to destroy Israel. The international community must to ensure not only that Israel has the diplomatic cover, but rather also the military means and room for maneuver, so as to send a clear message to Iran and Hezbollah that it will be confronted by a superior military force with the full support of its allies were they to seek an escalation. Such a display of strength and unity is the best hope of preventing a conflagration that the majority of Lebanese citizens do not wish to be dragged into by Hezbollah – and which Israel’s leaders and citizens do not want to see happen either.” 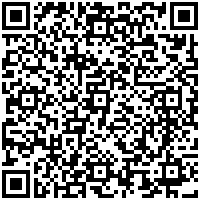