The Qatari envoy to Gaza Mohammed al-Emadi has entered the Strip Sunday night, according to Arab news media reports, and is expected to meet with the Hamas leadership on rehabilitating the war-torn area. The independent Lebanese daily Al Akhbar reported Monday morning (مصر تَعِد بمزيد من «الاستجابات»: تنازل إسرائيلي أوّل للغزّيين) that “after long intransigence, the occupation gave its consent to the entry of the Qatari funds into the Gaza Strip, in a first concession that the Egyptians promise to be followed by other Israeli ‘responses,’ which Hamas is cautiously anticipating—while never turning off its threats of re-escalation at any time.”

That last part, about the Hamas threat that should Israel not permit the renewed flow of Qatari millions in Gaza the rockets would start flying again, has been the foundation of Hamas’ strategy since the end of Operation Guardian of the Walls in May. However, according to Al Akhbar, Hamas and Israel may agree on changing their mutually contradictory approaches—in what could turn out to be a significant way.

Israel insists that the money will not enter Gaza in suitcases packed with cash dollars as in the past. One of the options being considered is that some of the money be transferred through the Gaza Post Bank to needy families, after a close inspection by the Shin Bet to make sure that the money does not flow to terrorist recipients. Some of the money will go to finance projects to encourage employment in the Gaza Strip and some will go directly to the purchase of fuel.

That’s about $20 million a month altogether, spent on food—through the Ramallah banks, and fuel—through the UN. The remaining monthly infusion to the tune of $10 million, according to Al Akhbar, will benefit the “cash for work” project to improve the economic situation in the Gaza Strip. Should that become an official beneficiary of the Qatari donations, the Lapid-Bennett government must be challenged to show that it isn’t just code for cash to pay Hamas employees and support the Hamas war effort.

Al-Akhbar has learned that Hamas informed the Qataris and Egyptians that it did not object to this method, but it requested that the Israeli side provide liquidity to banks operating in Gaza on a monthly basis. During the past weeks, Hamas has rejected a proposal to convert the Qatari grant into purchasing vouchers, stressing that this option is categorically and definitively unacceptable and that there are no solutions except to hand the money to the poor in cash.

This adamant refusal on the part of Hamas to a voucher system suggests it plans to lay its hands on at least part of the donations to pay for weapons and other war-related supplies, and for that, it needs cash only.

The Israeli approval of Hamas’ demand came at a time when the head of the General Federation of Palestine Trade Unions in Gaza, Sami al-Amsi, warned that the delay in disbursing the grant exacerbates the suffering of tens of thousands of unemployed workers, pointing out that each of these families is waiting for the payment of the grant. Israel’s blocking the entry of the $100 stipends for the month of June, Al-Amsi said, has created a situation whereby “thousands of workers who have been stranded and joined the unemployment army, without any source of income, are now dependent on Qatari money as a source that helps them face the hardships of life, and accordingly we reject any proposal to convert the grant into purchasing vouchers because workers and the poor benefit from the value of cash.”

According to Al Akhbar daily, citing Egyptian officials, the Israeli government has agreed to let the Qatari money into the Gaza Strip with a new mechanism, and the Egyptians are also awaiting the Israeli negotiating delegation to agree to the reopening the Gaza crossings and taking down the siege a notch, in addition to recent proposals regarding a prisoner exchange deal with Hamas.

THE FAMILIES OF THE MISSING SOLDIERS

The family of the late Lt. Hadar Goldin, who was killed during the 2014 Gaza War and whose body is being held by Hamas, on Sunday called on government ministers, saying they must not allow the transfer of the Qatari money to Gaza without the return of the prisoners and the two MOAs. “This money will explode in our faces,” said the late Hadar’s father, Prof. Simcha Goldin.

PA sources familiar with the Cairo negotiations have told Al Akhbar that the Egyptians warmed Israel that the continued closure of the crossings and preventing of the entry of goods bound for Gaza to Israeli ports would create major, new tensions. Cairo advised Jerusalem to open the crossings and—most urgently—let the Qatari money, before the Eid al-Adha holiday, which falls on July 19. Those sources believe the Egyptians expect the Israeli response to be positive, in light of the limited time left until the holiday in Gaza, and the terror factions’ frustration with procrastination and their threat of escalation.

Incidentally, Eid al-Adha is one of two official Islamic holidays celebrating the willingness of Abraham to sacrifice his son Ishmael as an act of obedience to God’s command (what – you thought they had enough spiritual creativity to come up with their own history and not steal it from the Jews?). Before Abraham managed to sacrifice his son, Allah provided a lamb to sacrifice instead. In commemoration of this intervention, animals are sacrificed ritually. One-third of their meat is consumed by the family offering the sacrifice, while the rest is distributed to the poor and needy. Sweets and gifts are given, and extended family is typically visited and welcomed (a good time to go stand in line in Israel’s security prisons and meet the Jew-killers inside). In the Islamic lunar calendar, Eid al-Adha falls on the 10th day of Dhu al-Hijjah and lasts for four days. In the Gregorian calendar, the dates vary from year to year, shifting approximately 11 days earlier each year. 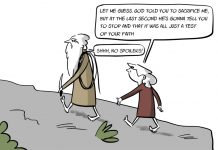 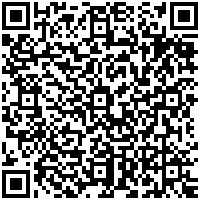