The Israel Defense Forces thwarted a late-night attempted terror attack Sunday night on the northern border between Israel and Syria, when soldiers spotted a terror cell attempting to place explosives near the security fence along the border.

We just thwarted an attempt by 4 terrorists to place explosives near the security fence between #Israel and #Syria.

Our troops & aircraft fired toward the squad & a hit was identified.

We are ready for any scenario & hold the Syrian regime responsible for all events in Syria.


The terrorists were spotted by a special commando unit of Israeli soldiers lying in ambush who saw them as they were planting the explosives along the security fence.

IDF soldiers and military aircraft opened fire at the terrorists, killing all four operatives. No casualties were reported among Israeli forces, and all units returned safely to base.

“We are ready for any scenario and hold the Syrian regime responsible for all events in Syria,” the IDF Spokesperson said in a statement posted on the Twitter social networking site.

Hezbollah has fought alongside and in support of the regime forces of Syrian President Bashar al-Assad at the behest of Iran for nearly a decade, beginning shortly after the start of the civil war sparked by the Arab Spring movement that swept through the region in the early part of 2011. 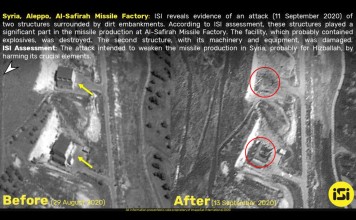