Israel is a more rightwing country today than it was last Monday as the final election results have been delivered very early Friday morning. Only 11 slates made it into the 21st Knesset, clearing a path for Netanyahu to forge whatever coalition government he chooses. In fact, as the NY Times editorial board put it right after the election, Netanyahu is now free to “threaten Israel’s democratic character” and “deepen the alienation between its right-wing coalition government and a majority of American Jews.”

Music to our ears… 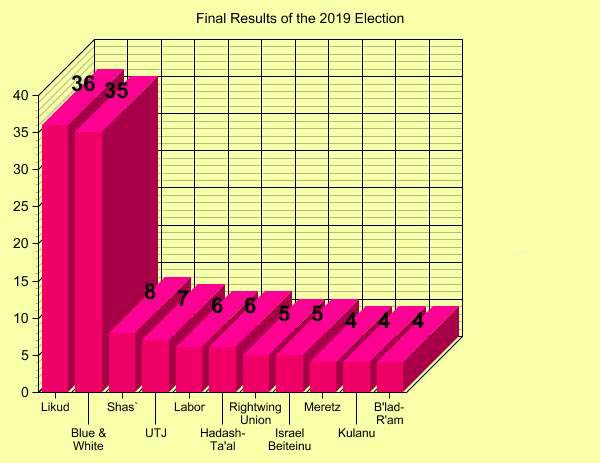 Here’s the chart, with Netanyahu’s Likud able to withstand any rebellion from his coalition partners Liberman, Kahlon and Smotrich. Sitting pretty on 65 seats, and living in harmony with Shas and United Torah Judaism which are so easy to please, the fifth-term prime minister can survive any one of his other partners threatening a walk and still stay alive.

His next mission, of course, is to start chipping at Gantz’s faction by luring away some of its rightwing members. Heck, some of them used to work for him. It’s true, they didn’t part as friends, Bibi and Gantz’s rightwingers, but anything beats the dreary life of a member of the loyal opposition.

In that context we should note that MK Yair Lapid, who on Wednesday promised to make Netanyahu’s life miserable, has already booked a flight to Vienna, where the climate is so much nicer and the chocolate to die for.

And as if Netanyahu was not already the happiest prime minister in the Holy Land, he woke up this morning to discover that his two worst enemies on the right, whom he was going to be forced to invite into his cabinet, did not make it past the 3.25% threshold. They remained about 1,400 votes short of the promised land, through reports of faulty programming and miscalculations of the soldiers’ votes, and numerous errors in the vote counts – it even looked like they had made it at some point and then this was declared an error – but in the end they disappeared from the political map for at least one term.

Meretz lost one seat—from 5 to 4; Labor crashed, dropping from 24 seats to 6; the Arabs are down 3 seats at 10; and the Rightwing Union, which as Habayit Hayehudi had shared 8 seats with Bennett and Shaked is now down to 5.

Shas, which was supposed to disappear below the threshold reached 8 seats; UTJ rose from 6 to 7; Kahlon dropped from 10 to 4; and Liberman, also declared a goner, lost only a single seat, from 6 to 5.

There probably is going to be a recount of the soldiers’ votes due to the unusual number of reported irregularities. The courts will deal with other complaints over the next week. And then it’s time for President Rivlin to hand Bibi his marching orders to go make us a government.