Rabbi Eitan Shenrav (Shnerb), who serves as the army chaplain of a reserve battalion, this week received a certificate of appreciation “in recognition of your activity and alertness in identifying a terrorist squad near the town of Har Bracha,” Kipa reported on Wednesday.

Rabbi Shnerb was staying with his unit in an outpost of the Shomron Regional Brigade, near the settlement of Har Bracha, and before Shabbat set out to check the eruv around the compound.

An eruv is a ritual enclosure, usually marked by a fishing line, used to work around the halachic prohibition of carrying objects in the public domain on Shabbat by symbolically integrating private and public properties into one legal-fiction of a “private domain,” thereby avoiding the prohibition.

During his inspection tour, Rabbi Shnerb noticed two suspicious individuals hiding on the slope below the post. He immediately reported the danger, rushed the emergency squad into action, and directed the fighters to the exact spot where the suspects were hiding.

The soldiers carried out a suspicious arrest procedure, arrested the suspects, and discovered a knife and a pistol on their persons.

The Reserves Rabbis’ Forum issued a statement saying they “congratulate Rabbi Eitan Shnerb on the capture of the terrorists, with God’s help,” and added that “the dedication of the military rabbis in the field to the mitzvah of Shabbat is one of the foundations of spirit and Judaism in the IDF and the core of its operational strength.” 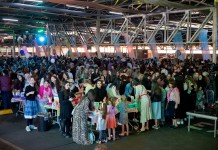