Wednesday night was “thank you” night for Prime Minister Benjamin Netanyahu, who together with his wife Sara attended a Jewish Agency event in New York City to honor outgoing chairman Natan Sharansky. “If you press them, they will crack” Netanyahu said he once told those trying to free Sharansky and fellow dissidents — and on Wednesday night he said it again, this time about the freeing the people of Iran from the ayatollahs of Tehran.

The prime minister opened his address by acknowleging major gifts to the Jewish State by the heavy hitters who came out in force to honor Sharansky – but first, he said, he had to thank
former U.S. President George W. Bush for being a “friend to Israel” for the eight years he was in the White House.

“On behalf of the Jewish people, and the people of Israel, I want to say, thank you President Bush … for the eight years of friendship and support you showed the State of Israel during your time in the White House. Thank you for the many contributions to strengthening the great alliance between Israel and America. And as Prime Minister of Israel, the leader of a grateful democracy, I thank you for everything you did as president of the United States to defend freedom around the world and in the Middle East.”

Next on the list were Sheldon and Dr. Miriam Adelson. “There are no great philanthropists in the Jewish world today. Birthright. Yad Vashem. Medical centers. College campuses. You name it – the Adelsons are doing it. Thank you both for all you do for the Jewish people and the Jewish State.”

Netanyahu went on to speak about Sharansky, and the long struggle for Soviet Jewry that wracked the Jewish world.

“I believed that strong and sustained leadership in the West could win the Cold War few thought could be won. And in fact, that’s what we proceeded to do. Avital remembers this.

“We spoke with the administration of President Regan. I have to mention Secretary Schultz. He was magnificent, magnificent, Ambassador Jeanne Kirkpatrick and many others. And I said to them, as did others: If you press hard enough, they will crack. Not everyone believed this.

“If you press them, they will crack. That same faith should guide us today, because there’s another would-be empire in the Middle East. It too oppresses its people. It too terrorizes its neighbors. But it too has a hollow core.

“If you press them, they will crack. They will succumb to strong pressure from the free world. And that country is Iran, and Iran’s aggression must be stopped and can be stopped. 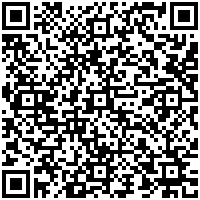