(JNS) The streets of Crown Heights in Brooklyn, N.Y., were eerily empty at 7 p.m. on Thursday. Normally, children are out playing and parents rushing home from work or errands, with crowds of people out now that the days are getting longer. But since mid-March, when local doctors advised the community to shut down because of the spread of the deadly coronavirus, this is the way it has been in the neighborhood, which has been inundated with cases of COVID-19.

With few cars on the road, other sounds can be heard during the day, such the murmur of prayer services. For the Orthodox, communal prayer services are like praying in synagogue. Theoretically, they can be held anywhere (think El Al flights to Israel), as long as it has a minyan—a quorum of 10 Jewish males over the age of 13.


With synagogues shuttered in communities worldwide, praying on the porch—or “porch minyan,” as it’s been dubbed—has become the new norm in many Orthodox communities across the globe. The one leading the prayers, known as the chazzan, says them in a booming voice so the words can be heard in other places farther away.

For the most part, such services have been received by non-Jewish neighbors with appreciation. “Our neighbors just delivered this lovely gift to all homes on our street,” Jennifer Dorner posted on Facebook, about those who were praying on the porches on her Montreal, Quebec, block, “as a token of appreciation since they’ve been coming out onto their porches to pray. But the singing and prayers have already been such a gift!”

Using only his first name so as not to draw attention, Michel, 71, an administrator at a local boys’ day school in Crown Heights, prays all three daily prayer services with a minyan. “This is davening for me,” he said, using the Yiddish word for praying, saying that without a minyan, his prayers don’t feel real. “That is the way I was trained from childhood, and that is the way I feel most comfortable doing it.”

From his porch, there is no minyan that he could pray with, so he goes to nearby ones mostly on other blocks. Michel rattles off the times and locations of several places where an afternoon prayer service can be found these days. He notes that for his own safety, some locations will not let him join since he is over the age of 65, and others say that only those who are their own porch can join.

Rabbis across the globe have banned the porch minyan on various grounds. In March the beit din, or rabbinical court, of Crown Heights made it clear that even an outdoor minyan is prohibited, saying “it is our opinion that individuals should daven alone in their houses at this time.” (One of the three rabbis who signed the letter succumbed to COVID-19.)

Despite this, as week upon week of staying home has started to wear people down, the “porch minyan” phenomenon has increased in the neighborhood.

“I can’t wrap my head around it,” says Eli Uminer, who himself has been sick with the coronavirus. “If it is a question of life or death, one is allowed to even desecrate Shabbos [the Sabbath]. In Jewish law, it states that you do this even if there is less than a one out of a thousand percent chance of dying.”

He says that while many remain on porches, some come from other streets and stand close to the home of the prayer leader. “I think that in terms of the virus, if done right it could be OK. But in reality, it never ends up that way; therefore, they should be banned.”

Uminer says that even without those conditions, for many, especially those in homes that are small and crowded with family members, “it’s more about cabin fever.”

The issue of crowding came to the forefront this week after a funeral for a revered rabbi in the nearby neighborhood of Williamsburg drew hundreds of Orthodox Jews from the Satmar community, leading to a stern rebuke from Mayor Bill de Blasio on Twitter. De Blasio later apologized for his remarks, which were widely condemned as anti-Semitic for singling out the Jewish community.

Under orders signed by New York Gov. Andrew Cuomo in March, public gatherings of any size or any reason are strictly forbidden.

Rabbi Yosef Braun, one of the three rabbis in Crown Heights who signed the original letter prohibiting the minyans, spoke about the topic in a Zoom class in April, saying that nothing changed from the ruling in March. He notes that it is too complicated and too difficult to keep social distancing, even on the porch. This is especially true during morning prayers, and on the Sabbath and holidays, when prayers are longer. During those times, he explains, it’s hard to keep a face mask on, people naturally begin to gather around each other, and he has even seen worshippers bring children—meaning a father could have to chase after them and mistakenly come dangerously close to others.

Braun says his home has a porch, and he could easily join a minyan. Nevertheless, he won’t do it because “besides the health concerns, there’s a host of halachic [Jewish law] concerns.”

Other rabbis have permitted these prayer sessions, including one of the local rabbis on the Crown Heights rabbinical board (who did not sign the original letter). Rabbi Berel Bell, a member of the rabbinical court in Montreal, initially wrote to his community in March, advising that they not hold outdoor minyans. More recently, however, he has joined one himself, and under certain conditions has permitted others to do the same.

‘A lot of things are weird’

In Crown Heights, which runs along Eastern Parkway—where on a spring day thousands might be walking—Michel says about health concerns, “I am not near people, there is social distancing, you are standing six feet away from people, and you cannot even have a conversation.”

Just before the afternoon prayer services on one street, Dr. Reuben Ingber notes that it was wonderful to have the possibility to pray from his porch with a minyan. “I don’t see anything wrong with it,” he says. “Do you want to join?”

Detective Vincent Martinos of the Crown Heights Police Department, agrees. He says the porch minyans have been fine according to the city’s ordinances. From what he has seen, people have been staying on their private property, wearing masks and keeping to social-distancing rules.

While he acknowledges some issues have occurred in the past six weeks at Chabad World Headquarters on Eastern Parkway, they were taken care of quickly. “Our community has done exceptionally well with social distancing,” he reports.

Michel says that even with the porch minyans, he is craving for more normal times, when everyone can go back to normal prayer services. He is especially looking forward to being called to the Torah, to look inside and kiss it, as is customary.

“It is weird,” offers. “A lot of things are weird today. But you have to live with the current situation.” 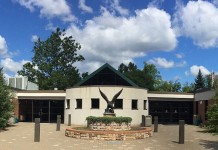 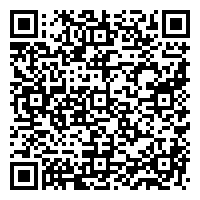