Herschel Walker on Wednesday called off a fundraiser at the home of a supporter who posted syringes arranged as a swastika on her Twitter account profile.

Walker, who won the 1982 Heisman Trophy and is considered to be one of the greatest college football players of all time, in addition to a stellar career playing for the Dallas Cowboys (two separate times), Minnesota Vikings, Philadelphia Eagles, and New York Giants, is running for the Georgia Republican party’s nomination for the US Senate in 2022. He is one of four Republicans vying for the right to compete against Sen. Raphael Warnock.


According to The Atlanta Journal-Constitution, in the first five weeks since Walker has declared his candidacy, his campaign fundraised $3.7 million. And then came the fundraising event at the home of Texas anti-vaxxer Bettina Sofia Viviano-Langlais, and folks—both friends and foes—pointed out to the campaign that the hostess features syringes arranged in the shape of a swastika on her Twitter profile picture.

Walker lived in Westlake, Texas, before moving to the Buckhead district of Atlanta ahead of his Senate run.

The Viviano-Langlais fundraising invite has since been removed, but the Internet never forgets, so here’s what it looked like:

Also in the Jolt this am, one of the hosts for a weekend fundraiser for @HerschelWalker this weekend appears to have a swastika as her profile pic. We have reached out for a response from the Walker camp. pic.twitter.com/MynCVfvn93

Campaign spokesperson Mallory Blount initially stated that the swastika in the profile is “clearly an anti-mandatory vaccination graphic,” which should match Walker’s anti-vaccine mandates stand (although it’s not clear if he himself received the vaccine).

But when Dan Gottlieb of the Democratic Party of Georgia issued a press release saying: “Herschel Walker defended a swastika, and canceling a fundraiser does not change the fact that he failed to condemn a hateful, anti-Semitic symbol,” Blount was quick to fix the brouhaha, issuing a statement that said: “Herschel is a strong friend of Israel and the Jewish community and opposes hatred and bigotry of all forms. Despite the fact that the apparent intent behind the graphic was to condemn government vaccine mandates, the symbol used is very offensive and does not reflect the values of Herschel Walker or his campaign.”

Viviano-Langlais, a film and TV producer as well as a literary manager who owns Accelerate Entertainment, has long been equating vaccine mandates with Third Reich principles on her social media. Last March she held a mask-burning bonfire party in her house.

As news spread about the Walker campaign’s dropping her because she’s too hot to handle, Viviano-Langlais started banning curious visitors from her account and explained that she had removed the syringe-swastika “because of the left’s need to silence free speech,” insisting she wasn’t an anti-Semite.

“It was a pic showing what happens when fascists demand people insert foreign material into their body they don’t want,” she tweeted. 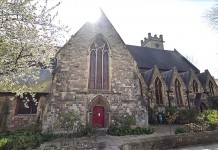