The biggest innovation and victory of President Donald J. Trump has to be his turning Twitter into a political weapon which he wields with consistency and skill, forcing an entire world to visit his account to learn about the latest turn in White House policy. Trump’s Twitter statements are reminiscent of Chairman Mao Tse-tung’s little red book of inspirational quotes, which leftist students from Beijing to Berkley used to espouse with fervent dedication (“Fighting is unpleasant, and the people of China would prefer not to do it at all. At the same time, they stand ready to wage a just struggle of self-preservation against reactionary elements, both foreign and domestic.”).

Among a dense series of tweets through the day Tuesday, President Donald Trump taunted former president Barack Obama for dropping the ball on Iran, called for imprisoning “Crooked Hillary Clinton’s top aid, Huma Abedin,” shamed North Korea’s “Rocket Man” for capitulating to the sanctions and deciding to talk to South Korea, gave it to the Democrats who are “doing nothing for DACA,” and blamed the Palestinian Authority for not giving him respect.


The president actually managed to integrate a slight against Pakistan in the insult to the PA, with the double-tweet’s opening line: “It’s not only Pakistan that we pay billions of dollars to for nothing, but also many other countries, and others.” It was a reference to Trump’s Sunday tweet, “The United States has foolishly given Pakistan more than 33 billion dollars in aid over the last 15 years, and they have given us nothing but lies & deceit, thinking of our leaders as fools. They give safe haven to the terrorists we hunt in Afghanistan, with little help. No more!”

Trump quickly moved on to the meat of the grudge tweet: “As an example, we pay the Palestinians HUNDRED OF MILLIONS OF DOLLARS (sic.) a year and get no appreciation or respect.”

Clearly, this is not about US foreign policy, it’s all personal. As in Randy Newman’s immortal song Political Science: “We give them money / But are they grateful? / No, they’re spiteful / And they’re hateful / They don’t respect us / So let’s surprise them / We’ll drop the big one / And pulverize them.”

“They don’t even want to negotiate a long overdue peace treaty with Israel,” Trump’s tweet continues, skillfully simplifying in a short line what thousands of op-ed writers over a century have claimed is a very complicated thing. It really isn’t. Since the first attempts in the 1930s to reach an understanding between Arabs and Jews in Eretz Israel (which Jews used to call Palestine back then), it’s always been the Arabs who simply refused to even consider an honest peace agreement.

Then with a refreshing take on his Jerusalem declaration few have considered, Trump tweeted, “We have taken Jerusalem, the toughest part of the negotiation, off the table, but Israel, for that, would have had to pay more.”

The line should serve as a warning not just to the PA Arabs and the UN who are still hoping the US some day would revoke its recognition of Jerusalem as the Israeli capital – it should be given ample consideration by Israel’s right: in his mind, Trump believes he did Israel a huge favor, and some day he plans to collect on it with Israeli giveaways.

Not for the foreseeable future, though, since this was a grudge tweet: “But with the Palestinians no longer willing to talk peace, why should we make any of these massive future payments to them?” 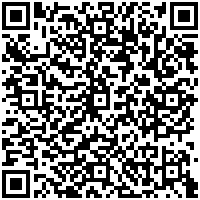