US President Donald Trump said Thursday (Jan. 23) that he will release the details of his “Deal of the Century” within the next four days — specifically, before the arrival of Prime Minister Benjamin Netanyahu and Blue & White faction leader Benny Gantz next Tuesday.

Netanyahu was invited by the president to meet with him at the White House in Washington DC to discuss the Trump Administration’s Middle East Peace Plan. The prime minister suggested the invitation also be extended to Gantz as well, in order to secure “the broadest possible consensus.”

Asked whether he would release the details of the plan when the Israeli leader arrives, or perhaps after, Trump replied, “Sometime prior to that… Probably, we’ll release it a little bit prior to that.”

Speaking to reporters aboard Air Force One while en route to Florida for a political event, the president added, “It’s a great plan. It’s a plan that really would work.”

He said, however, that Palestinian Authority officials might react negatively to it at first, even though the plan is to the benefit of their people.

Trump added that he was “surprised” that both Netanyahu and Gantz are coming to Washington “off the campaign trail. We have both candidates coming – unheard of,” the president commented, adding, “I’d love to be able to do that deal. They say that’s the hardest of all deals. 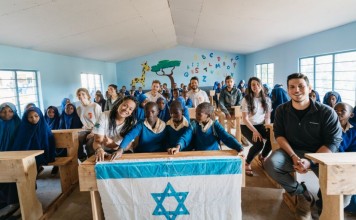