by Michael Bachner A deadly stabbing attack was carried out by two Palestinian terrorists at an Israeli supermarket in the Binyamin Region on Thursday, February 18, killing Tuvia Yanai Weissman, a 21-year-old resident of the Jewish community of Michmash.

Weissman will be laid to rest on Friday morning at 8 am at the Mount Herzl military cemetery in Jerusalem.

According to a police spokesperson, shortly before 5:00 PM two 14-year-old Palestinians entered the supermarket in the Shaar Binyamin industrial zone and walked around for 20 minutes before stabbing two Israeli men, one of whom suffered critical wounds and died in hospital. Civilians prevented the terrorists from escaping by using shopping carts until the terrorists were shot by two armed civilians at the scene.

“The store was packed with people when I suddenly heard people screaming,” an eyewitness at the scene told Tazpit Press Service (TPS). “Someone was shouting ‘what are you doing?’ and then I heard the gunshots. When people were running away I heard babies and women crying, it was frantic.”

According to Magen David Adom (MDA), two civilians were wounded in the incident. One of them, 21-year-old Weissman, was critically wounded after suffering stab wounds to his neck. He was treated at the scene and transported, unconscious, to Shaare Zedek Hospital in Jerusalem where he later succumbed to his wounds.

The second victim, 36-year-old Avi Avital, resident of the nearby Jewish community of Tel Zion, suffered moderate stab wounds in the back and was transported fully conscious to Hadassah Medical Center on Mount Scopus in Jerusalem. At least 10 other people at the scene suffered from shock, including a pregnant woman.

Yanai Weissman is survived by his wife Yael and their 4-month-old baby daughter, both of whom were present at the scene of the deadly attack.

Israel’s President Reuven Rivlin commented: “A man returns from his day at work, stops to buy groceries for the Sabbath, and is taken away forever by murderous villains. We will stand strong and respond firmly to restore calm and normality to the lives of our citizens everywhere. We will defeat terrorism,” he said.

“At this time of anguish and heartache, I wish to offer comfort to the bereaved family, and my prayers for the quick recovery of the wounded,” added Rivlin.

“We are deeply saddened by the murder of Yanai, a resident of Michmash,” Avi Roeh, Head of the Binyamin Regional Council told TPS. “The pain and sorrow are huge but we will not be broken. The People of Israel has faced many tough times during history and always coped with them and grew stronger. To all those who try to harm us, I want to say that we are determined and strong and that we will win.”

The two wounded terrorists, identified as Iham Sabah and Omar al-Rimawi from the Palestinian Authority village of Beitunia near Ramallah, were treated at the scene and transported to Hadassah Ein Kerem Medical Center in Jerusalem. Sabah was later pronounced dead by the hospital, while al-Rimawi was reported to be in moderate to serious condition.

The Shaar Binyamin industrial zone is a joint shopping and business area where both Jews and Palestinians coexisted together peacefully until today. The IDF announced that following the attack, Arabs from the Palestinian Authority will not be allowed into the industrial zone until Sunday. The supermarket was ordered to be shut down following the security guards’ failure to prevent the entry of the two knife-wielding terrorists.

Michael Zeff contributed to this report. 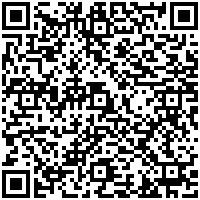