The IDF Spokesperson’s Unit has confirmed that three cadets (male and female) and an officer (female) were killed in the truck ramming attack that took place early Sunday afternoon near the promenade in Jerusalem’s Armon HaNatziv neighborhood, also known as East Talpiot. The families have been notified, according to the IDF.

“Seventeen other IDF officers and cadets were injured and evacuated to hospitals for medical treatment,” the IDF spokesperson’s office said in its statement.


Prime Minister Benjamin Netanyahu and Defense Minister Avigdor Liberman both went to the site of the attack early Sunday evening, where they received a briefing by Jerusalem District Police Commander Yoram Halevy.

Mr. Netanyahu told reporters at the site that it is believed Sunday’s attack was similar to those inspired by the Islamic State terrorist organization (Da’esh / ISIS), such as those “we saw first in France, then in Germany and now in Jerusalem,” and that Israel must fight the “same ongoing battle against this global scourge of the new terrorism” along with the rest of the world.

Israel Police Commissioner Roni Alsheikh told reporters earlier in the day at a separate news conference that because there had been no intelligence alert and no prior security warning of the attack, there had been no way to prevent it. Police have placed the city of Jerusalem on heightened security alert in response to the attack.

Meanwhile, young Arab men were handing out sweets and pastries to passing motorists and passengers on the streets of Gaza and Palestinian Authority-controlled cities in Judea and Samaria, as photographers made sure to snap photos of the scene to post on the internet. Pictures of smiling Arabs with tasty treats made the rounds of social media, celebrating the bloody results of the vicious attack.

Three of the victims had to be extracted from under the truck with the assistance of a heavy crane.

An eyewitness to the attack said Arab passersby who were present at the time of the attack stood and applauded as the terrorist — 28-year-old Fadi Ahmad Hamdan al-Qunbar, a resident of the Jerusalem Arab neighborhood of Jabel Mukabar who carried a blue Israeli ID card and an Israeli drivers license — reversed his vehicle and ran over the victims a second time.

The Izz a-Din al-Qassam military wing of the Gaza-based Hamas terrorist organization issued a statement shortly after the attack, saying Qubar was a released security prisoner who had served time in an Israeli prison. The group referred to the terrorist as a “mujaheed” — a jihadi fighter. 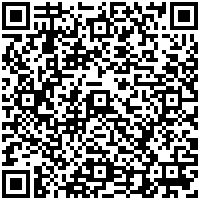