Israel hater Pink Floyd singer Roger Waters, 73, has dropped Rula Jebreal, 43, the Arab girlfriend he had been dating after dumping his fourth wife, Laurie Durning, Page Six reported. Waters is a world-renowned, frothing at the mouth BDS activist, and Jebreal has written “Miral,” a book about women caught in the crossfire of the Israeli-Arab conflict, which Julian Schnabel, Jebreal’s ex husband, turned into a movie.

According to Page Six, Jebreal and Waters were introduced by Waters’ ex-wife Durning and Jebreal’s ex-husband, biotech entrepreneur Arthur Altschul Jr. Jebreal asked to meet Waters because of his anti-Israel activism, they became friends and “dined together many times.”


After Waters split with Durning, according to Page Six, “he began an affair with Rula. Arthur found out, and their marriage ended. Roger and Rula have been together around three months and they discuss Palestine all the time, they are both so very passionate about it. It’s the talk of the Hamptons, and some people are calling them the ‘Palestinian power couple.’ But it is very weird for their former spouses, who introduced them.”

Back in January 2013, Jebreal debated Rabbi Shmuli Boteach on CNN, and lectured him, live, “…I want to tell the Rabbi, this is really something that we learned from Selma, as you mentioned, when you uphold the supremacy of one ethnic group, this is not a democracy anymore, this is an ethnocracy. We need to reject that whether it’s in Europe, in Israel, or here in America. We can’t have segregation as an answer. It’s inclusion and unity.”

To which our man Boteach replied: “With all due respect, Rula, you’re excusing violence and that’s very tragic. … Let’s stop the nonsense. Israel is the only democracy in the Middle East. You are a Palestinian woman who has Israeli citizenship. You are allowed freedom of expression. No one tells you who to fall in love with, you don’t get shot by your uncle or by your brother because you fall in love with somebody your father doesn’t approve of. You live a Western life. You live with the kind of human rights that Israel protects. Israel has 1.5 million Arab citizens, there is no segregation and we all know that. So let’s not excuse terrorism with some Israeli policy.” 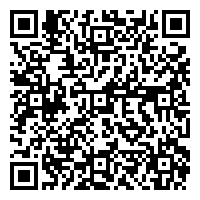