“The coming calendar year should be a year of celebrations,” writes Ari Shavit, author of the 2013 New York Times Best Seller, “My Promised Land: The Triumph and Tragedy of Israel.” Shavit notes the abundance of major anniversaries awaiting us in 2017:

August 31, 2017 marks the 120th anniversary of the First Zionist Congress, in 1897. It’s hard to imagine today what a brave and inspired event it was, which turned overnight the yearnings of a nation into a solid, pragmatic political agenda. Then, November 2, 2017 marks the 100th anniversary of the Balfour Declaration. Again, who would have believed that the most prominent imperialist power, the successor of the Roman Empire, if you will, would give its enthusiastic support to a political, territorial response to the millennia of Jewish yearnings for Zion. Then, if that’s not enough, November 29, 2017 marks the 70th anniversary of the United Nations’ decision to establish a Jewish state in the Land of Israel. An idea that was galvanized 120 years ago and received a strong boost 100 years ago became a wide confirmation by the nations of the world 70 years ago.


But that’s not all. After all the above had been said and gone, Israel received a gift that could only be described as coming from God himself. On June 5th, 2017, Jews everywhere will celebrate the liberation of biblical Jerusalem, along with the last areas of the Land of Israel which had remained under foreign occupation: eastern Jerusalem, including the old city and the Temple Mount; Judea, birthplace of King David; Samaria, where the Kingdom of Israel ruled for several centuries; Gaza, where Jews have lived for millennia, and the Sinai — the wilderness where the nation received its founding document, the Torah; and the Golan Heights, where Jews have been making wine and growing winter wheat since King David chased away the Arameans.

But then a terrible thing happened: the very gift that restored a tiny, frightened country to its historic size and made its enemies hide in fear of its wrath — became the focal point of enmity between brothers and the stage upon which generations of Israelis have been fighting their wars over the identity of their homeland. Meanwhile, Israel’s leaders lost their nerve, and instead of turning the almost inconceivable victory into a boon for national expansion and enrichment, both spiritually and physically, annexed eastern Jerusalem but handed Temple Mount to Arab control, annexed the Golan Heights but stopped short of annexing Judea, Samaria, Gaza and the Sinai.

Instead of making 1967 the beginning of mass immigration of dedicated, inspired Jews to their homeland, Israeli governments fretted over the “problem” of the territories. Is it legal for Jews to live on the “West Bank”? Should Israel instead use the territories to seduce its neighbors into recognizing the Jews’ right to live? Wouldn’t an expansion into the “territories” only encourage the religious, rightwing elements who were already increasing in number and pushing to rid the country of its traditional, Socialist leadership?

And so, with its hesitation, Israel clued the gentile nations as to how it wanted its new territories to be viewed. And that slippery slope continues to this day to do its devilish work. Prime Minister Menachem Begin established this immoral notion as a praiseworthy protocol: “Territory for Peace.” The Egyptians in 1978 agreed to recognize Israel’s right to exist, and in return they received a swath of land as big as Portugal which they had failed to conquer in war.

Israel’s failure to annex all of its liberated lands actually jeopardized the legitimacy of the areas it did annex. Eastern Jerusalem is not recognized as part of Israel by any country, because Israel has declared in 1993 that it would “return” the other liberated lands to their “rightful owners,” the Arabs. If those lands do not belong to Israel by its own declaration, why should anyone recognize that those other lands — Jerusalem and the Golan — are any different?

With that failure of nerve guiding Israeli foreign and defense policy for the entire past 50 years, the Israeli Left has big plans for the remarkable year of celebrated miracles of 2017. Ari Shavit wrote in Ha’aretz Thursday: “Half a century is a milestone. Half a century is also a wake-up call. There are no more excuses and justifications and there is no more ‘tomorrow.’ The permanency of the occupation is becoming an integral part of our life and our identity. Thus it is endangering the State of Israel, the Jewish people and the Jewish heritage. Before the Palestinians embark on the 50th-year intifada and before the international community imposes the 50th-year sanctions on us, it is incumbent upon us to find the courage to end the 50-year curse by ourselves, for ourselves.”

Just like that. The biblical lands where our entire history took shape, where Jewish kings and prophets, warriors and farmers walked and fought and preached and traded — they are a curse to the Israeli left. The divide that began to open 50 years ago has become unbridgeable, save for yet another Divine intervention. But as patriotic Jews and lovers of Zion, we must spend the coming year in celebration of all those miracles, in thanksgiving, in a Zionist jubilee party that starts now and goes all the way to 2018.

We are Jews, we are Zionists, we are happy — get used to it! 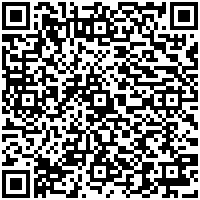