The suspension of law enforcement in guarding Israel’s national treasures in Judea and Samaria due to the coronavirus outbreak is giving Arab robbers of antiquities an opportunity to pursue illegal excavations undeterred, according to the Shomrim Al Hanetzach (guarding eternity) NGO, which is calling on Defense Minister Naftali Bennett to return the inspectors to the field.

(Bennett could divert some of the 600 Border Patrol and Coordinator of Government Activities in the Territories officers he’s been sending to evict the Jewish settlers of Yitzhar – DI).


COGAT’s enforcement activity was cut to only 30% in the wake of the pandemic, and as a result, grave robbers and treasure hunters have been roaming unmolested throughout the ancient sites of Judea and Samaria. A week ago, members of Shomrim Al Hanetzach reported a particularly intense robbery dig, in a cave located inside the ​​Mount Kabir Nature Reserve, between Elon Moreh and the Jordan Valley.

A survey tour Shomrim Al Hanetzach conducted on Tuesday discovered that over the past week, three new openings had been dug in the rock wall, apparently in order to reach the depths of the cave.

The Ein Samia site in eastern Benjamin, where very rare artifacts were found, has in recent weeks been destroyed by Arab treasure seekers. This site features the archaeological remains of a city from the time of the kings of Israel, known as Hirbat Marjama, and past archaeological excavations have yielded very rare finds from the Middle Bronze Age (about 4,000 years ago), including a wide wall and a tower, shaft graves and a silver cup illustrated with a scene with Mesopotamian motifs.

Recently, an Arab-owned quarry operating in the Palestinian Authority has begun to expand into the area of Ein Samia in a manner that raises concerns about severe environmental and aesthetic damage.

Last week, Shomrim Al Hanetzach reported to COGAT archeology inspectors about a gang that was digging in Horvat Alamit near the entrance to Jerusalem, and their quick response has led to the capture of the bandits.

Another gang was caught in Ein Samia after a rapid intervention by the same inspectors.

“The State of Israel is currently in a comprehensive fight against the coronavirus, but we must not ignore the day after, nor neglect our eternal treasures,” said Ethan Melet, activities coordinator for Shomrim Al Hanetzach.

“The freedom of action of the pirates demonstrates perfectly why the antiquities inspectors are essential employees who must be on the ground in full force and receive additional manpower,” Melet said. “We urge Defense Minister Naftali Bennett to return them to the area as soon as possible.” 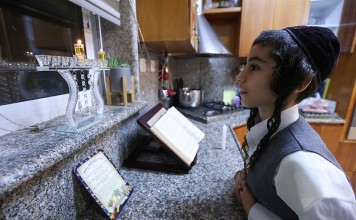