Defense Minister Benny Gantz and Palestinian Authority Chairman Mahmoud Abbas met Tuesday night at the home of the defense minister in Rosh HaAyin. It was the first working meeting between the chairman and an Israeli senior official inside Israeli territory since 2010. It was also the first time Abbas had officially been inside pre-67 Israel since the funeral of Shimon Peres. The two agreed on some economic and civic gestures to the Palestinian Authority.


The meeting was organized by the Coordinator of Government Operations in the Territories, Major General Ghassan Alian. Also on hand were PA Intelligence Chief General Majd Faraj and PA senior official Hussein a-Sheikh. It lasted about two and a half hours and a small part of it was devoted to a private conversation between Ganz and Abbas.

The opposition attacked the government for returning the Palestinian issue to the agenda, on the left Gantz received congratulations for “striving for a political solution,” and the DM received harsh criticism from within the coalition government.

Housing and Construction Minister Zeev Elkin (New Hope) on Wednesday morning told 103FM: “Gantz has no rope from the government to conduct political negotiations, Gantz knows this.” Elkin added with considerable derision: Gantz’s ideology probably allows him to comfortably host someone who pays salaries to terrorists.”

Of course, all the governments in which Elkin served in the past also tolerated (though penalized) the PA’s salaries to terrorists behind bars in Israel, with a few exceptions. If the salaries are a do-or-die issue, then there could be no dealings with the PA, which is righteous, but would also mean the weakening of Fatah in Ramallah, and its possible replacement by Hamas. So, being a purist is cheap. At the same time, there are many other problems with the PA’s behavior that should trouble Elkin and the Lapid-Bennett government.

When asked if Prime Minister Naftali Bennett is close to Gantz’s positions, he replied: “It was done with his approval, but I don’t see anything unusual here in terms of what was in the past.” But he stressed again, “I would not invite someone to my house who pays salaries to the murderers of Israelis. “It’s delusional, Abbas is financing a campaign in The Hague to put Gantz behind bars because he sees him as having been a war criminal during his time as chief of staff. I would not invite such a person into my home, it would have been better if he had found a different guest.”

Does Elkin have a candidate? Marwan Barghouti? Mohammed Dahlan? It’s a shame Israel doesn’t have Swedes or Danes for neighbors. It has Arabs, and those folks are stuck in the Middle Ages, still mourning the decline of their empire that spread over three continents.

MK Yael Ron Ben-Moshe (Blue&White) was very supportive of her party’s chairman, tweeting: “Promoting trust-building measures, in the economic and civil spheres, between us and the Palestinians, is the responsible thing to do. Security coordination with the Palestinians has saved and will save many lives. It is the Defense Minister who sends our soldiers into battle, he must look into the eyes of their parents and our eyes and ensure that he has done everything in his power to prevent the next war.”

The Defense Minister announced Wednesday morning that he had agreed with the PA chairman on advancing tax payments to the Palestinian Authority as one of the “confidence-building measures” MK Ben-Moshe mentioned. The move means a kind of a loan worth NIS 100 ($32 million) to the PA. In reality, the loan compensates them for the amounts Israel deducted from the taxes and customs it collects on their behalf – on account of the salaries to terrorists. It all comes up even in the end, see?

Gantz also announced that he had promised his approval for another pulse of updating 6,000 Arab residents in the registry in Judea and Samaria on humanitarian grounds, as well as 3,500 Gaza Strip Arabs. It’s all very humanitarian.

Oh, and Gantz said he and Abbas discussed the need to approve additional PA housing master plans in Area C.

And a hard-boiled egg. 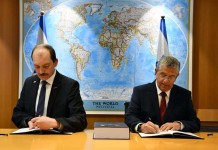