Officials at a high-ranking German government-owned agency have been exposed as carrying out vicious antisemitism along with channeling generous foreign aid to Palestinian Authority groups who have glorified violence and terrorism.

The revelation comes as German Foreign Minister Heiko Maas is in the region for a visit with Prime Minister Benjamin Netanyahu and Palestinian Authority officials.

The NGO Monitor watchdog organization said in a statement Tuesday night that it has identified a number of virulently antisemitic statements made by officials of the German Society for International Cooperation (GIZ) – a German government-owned agency that implements Germany’s humanitarian and development aid around the world. GIZ has funded Israeli and Palestinian Authority NGOs (non-governmental organizations).

These statements include comparisons between Israel and the Nazis, claims alleging that a “Hebrew spring” was behind the downfall of Arab dictators, and images depicting Israel as a grotesque two-headed monster. GIZ members also posted numerous statements on Facebook that justify Gaza rocket attacks against Israeli civilians and endorse discriminatory BDS (boycott, divestment and sanction) campaigns against Israel.

“This should serve as a wakeup call for GIZ and other government agencies in Europe as to the urgency of addressing this dangerous and unacceptable antisemitic discourse at the highest levels of government.”

The embarrassing revelation comes even as Germany’s foreign minister is in Israel making an effort to convince Israel not to abandon the two-state solution, even as he underscores his own personal determination to fight antisemitism.

“One of the first visits that I made upon arriving here was to Yad Vashem,” Maas said at Monday’s joint news conference in Jerusalem with the Israeli prime minister. “As a German this was a very moving visit. I would really like to make it clear that the struggle against racism and antisemitism is important to me…”

Nevertheless, Maas added that “as friends we can disagree on various issues such as … two states for two peoples, there as well our views differ, but first and foremost we are friends.” 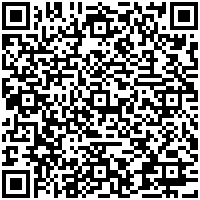