According to the Oslo agreement, Area C is under complete Israeli control, both in terms of military and civilian rule. Initially it comprised 74% of the “West Bank,” but under the 1998 Wye River Memorandum, Israel withdrew from an additional 13%, officially reducing Area C to about 61% of the land between the Jordan River and the 1949 armistice line.


According to Regavim, the Palestinian Authority with support from the European Union is creating facts on the ground across Israeli-controlled Area C with zeal and decisiveness reminiscent of the Zionist settlers of the 1930s and ’40s.

In essence, the Arabs have been applying former PA prime minister Salam Fayyad’s plan for territorial contiguity for the establishment of a future Palestinian state, which suggests that statehood “is something that will grow on both sides as a reality […] creating a belief that this was inevitable through the process, a convergence of two paths […] from the bottom up and the top down.”

According to Regavim’s data, the number of illegal Arab structures in Judea and Samaria has almost doubled over the last decade, from the start of Prime Minister Netanyahu’s second term in 2009.

But the even more worrisome figure is the size of the illegally captured land which on paper should be under Israeli controls.

For the sake of comparison, Israeli settlements in Area C account for only 2.5% of the area. During the Netanyahu decade, the settlements grew by less than 2,471 hectares.

These figures are accompanied by an “agricultural takeover” carried out by the Palestinian Authority – the illegal cultivation of hundreds of thousands of acres of state land, in order to grandfather facts on the ground: if you grow there for a certain length of time and the state doesn’t challenge you, it’s yours.

These figures have been revealed in recent weeks to heads of local municipalities in Judea and Samaria, who are expected to come out with a fierce campaign rebuking the prime minister for his failure to enforce the law in order to stop the Palestinian Authority’s vast illegal expansion.

While the Netanyahu government has been eager to obey every high court order to uproot Jewish settlements, it is reluctant to follow the same court’s orders to demolish illegal Arab settlements. The heads of local Jewish communities will demand that the Netanyahu government launch a viable plan to prevent the continued establishment of a Palestinian state in Area C. They will also demand a verifiable schedule of removing the PA’s presence from Israeli territory.

Regavim director Meir Deutsch said in a statement: “One can debate feelings, but the figures speak for themselves and they’re not subject to debate. There is no status quo on the ground – the Palestinian Authority is constantly working to create irreversible facts on the ground, while the State of Israel and its leaders are simply asleep at the wheel.”

“If the Israeli government does not wake up now, the citizens of Israel will wake up one day to the reality of a terrorist state across the border. These figures are a wake-up call,” Deutsch said. 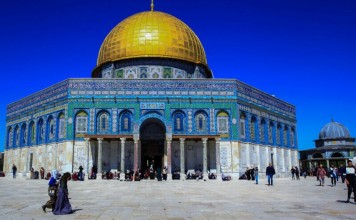