Tomorrow, Tuesday, June 5, 2018, will mark the 51st anniversary of the second most devastating catastrophic even in “Palestinian” Arab history, a date Jews and gentiles the world over mark as the beginning of the miraculous 1967 Six Day War. Naksa Day – in Arabic Yawm an-Naksa, meaning “day of the setback,” mourns Israel’s victory which, 19 years after the initial shock of seeing Jews defeating the local and the invading Arab armies, has destroyed the armies of Egypt, Jordan and Syria, killing hundreds of thousands and tripling Israel’s size in less than a week.

The Naksa riots tradition began in 2011, with border demonstrations started on May 15 to commemorate Nakba Day—the catastrophe of 1948-49 that resulted from the Arabs’ 1947 refusal to divide the land and share it with a Jewish state. Instead, they vowed to throw the Jews to the sea and ended up losing a great deal more land than they would have had they agreed to the 1947 deal.

Filled with patriotic fervor, on June 5, 2011, more protesters gathered on Israel’s border with Syria and, according to the Syrians, 23 of them were killed and 350 wounded by live fire from Israeli forces. Israel suggested these figures were exaggerated, citing 12 known injuries. IDF spokesman Gen. Yoav Mordechai accused Syria of creating a provocation at the border to distract from its violent crackdown on the Syrian uprising which had just begun. Of course, 600,000 dead later, 23 victims are often just another day at the Syrian civil war.

Al Jazeera maintains that “the fifth day of June 1967 is a day the Arabs are still viewing as a remarkable day in their modern history, a day where the armies of three Arab countries could not stand up to the Zionist occupation army, met a terrible defeat, and let Israel occupy the Gaza Strip and the West Bank and the rest of the Jerusalem, as well as the Syrian Golan Heights and Sinai, to become the dominant force in the region, deepening the notion of their having an invincible army.”

“The defeat of the Arabs in the June 1967 war, which was followed by the death of Gamal Abdel Nasser in 1970, constituted the decisive blow that ended nationalism,” said Fawaz Gerges, a professor of international relations. “The Arabs have lived for years under the dreams of cultural glory and strength, but their defeat them within a few hours at the hands of the emerging Jewish state led to the collapse of the foundation myth of Arab nationalism, embarrassing their guardian – Egyptian leader Gamal Abdel Nasser, which led to dispelling the promise of a bright future.”

“Today, fifty-one years after the setback, the Arabs are still unable to recover all that they lost in the 1967 war or to make radical changes in the political and military situation imposed by this war on the region,” Al Jazeera argues, adding, “But it is also clear that Israel was forced to leave the Gaza Strip in 2005, And is still suffering from the headache of the accumulation of the strength of the Palestinian resistance, which, although exhausted by the repeated Israeli attacks, Israel could not eliminate. Instead, the Palestinian resistance exhausted the occupation in various forms, so that we can say that Israel is no longer able to write the last chapter of the conflict on this earth.”

That is the Arab mindset then, 51 years after the Six Day War and 70 years after Israel’s independence. On Tuesday, when they no doubt will rush the Gaza fence again, in their minds they will be chipping away at the Jewish State’s ability to remain the decisive force in this arena.

We pray for the certainty and bravery of our soldiers and bless them that they will fire at the terrorists and take them down in what, in the end, will be yet another round on our way to prove to our Arab neighbors that they simply don’t stand a chance to defeat us. 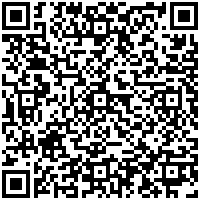