The government of caretaker Prime Minister Yair Lapid is expected in about two weeks to confirm its entry into the Creative Europe program — a European Union program for cultural cooperation that boycotts the post-1967 areas of Israel.

The agreement, which was unanimously approved earlier this year by the government of then-Prime Minister Naftali Bennett, excludes Israeli artists living in Judea, Samaria, the Golan Heights, the Jordan Valley and eastern Jerusalem.

It also precludes the exhibition or performance in those areas by any artist elsewhere in Israel who receives funds from the program. Those artists and cultural institutions who operate in the post-1967 areas of Israel will not be able to receive funds.

To be included in Creative Europe, Israel will agree to pay NIS 33 million over the next five years. The program is budgeted at 2 billion euros – providing a profit to Israel of tens of millions of shekels, according to the Hebrew-language Israel Hayom news site.

Five years ago, the Likud party’s then-Culture Minister Miri Regev refused to approve the agreement because of its clear discrimination against Israeli citizens living in post-1967 areas.

Attorney Ariel Ehrlich, head of the litigation department at the Kohelet Forum pointed out in a statement quoted by Israel Hayom, “This is Israeli consent to wholesale discrimination of hundreds of thousands of citizens.

“Any cultural project, show, exhibition, performance or festival that receives or wishes to receive support from the European Fund – will be forced to declare that it will not appear in Katsrin, the Dead Sea, and also in the Old City of Jerusalem.”

Signing such an agreement – especially after the US recognition of Israel’s sovereignty in the Golan Heights, and its establishment of its embassy in Jerusalem, “gives a boost to the BDS (Boycott, Divest & Sanctions) elements who seek to boycott Israel.”

Despite the obvious implications of signing such a biased agreement, the Culture Ministry responded that as with previous European programs, “the agreement is relevant only to European funding that comes from the program…The agreement does not prevent cultural institutions or artists who receive grants from the program from being active in Judea and Samaria and the Golan Heights, as long as it is not funding within the framework of the program.”

However, if an institution (such as Habima Theater in Tel Aviv) is receiving funds from the program, that institution will be prohibited from performing in post-1967 areas such as eastern Jerusalem, for the duration of the grant — even if the specific performance is not being funded under the program.

Ehrlich pointed out the difference between the two programs: “In the Horizon program, Israel agreed to pay the political price because the benefit was enormous – partnership in a capital-intensive project which allows Israel to be at the forefront of research and science.” The same cannot be said of the current Creative Europe grant.

According to the Culture Ministry, “There is no change between the wording of the territorial cause stipulated in the Creative Europe agreement and the manner of its implementation, and the territorial clauses in the agreements signed between Israel and the European Union in the last decade, chief among them the Horizon Agreement from 2014, the CBC Agreement from 2017, and Horizon 2021.”

Bottom line: Europe is bribing the Bennett-Lapid government into violating Israel’s anti-boycott laws. But the Kohelet Policy Forum isn’t having it.

Kohelet warned the government – in a letter to Lapid, Bennett, Culture Minister Hili Tropper and Attorney General Gali Baharav-Meara – that if by Thursday (Sept. 22) the government does not announce cancelation of Israel’s participation in the program, the Policy Forum plans to petition the High Court of Justice to force it to do so. 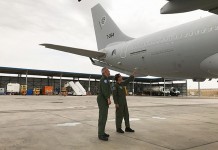