Prime Minister Benjamin Netanyahu met Thursday with foreign ambassadors in the north at a spot close to the IDF units that are working to expose and neutralize the tunnels built by Iranian-backed Hezbollah guerrilla forces.

Netanyahu updated the ambassadors on Operation Northern Shield, and Hezbollah’s intentions to use the cross-border tunnels in an attack against Israel.

The prime minister emphasized that “Hezbollah’s tunnels are only one expression of Iran’s aggression in the region.”

Netanyahu asked the ambassadors to condemn the violation of Israeli sovereignty, and to join in the demand to impose increased sanctions on Hezbollah.

The ambassadors were briefed by GOC Northern Command Maj.-Gen. Yoav Strick and GOC Planning Maj.-Gen. Amir Abulafia, after which they toured the area of the exposed tunnel.

“We are systematically and decisively denying our enemies the tunnels weapon. We are doing this with Hamas, and with Hezbollah; we will do whatever is necessary,” Netanyahu told the ambassadors.

“Whoever attacks us is taking his life into his hands. Hezbollah knows this and so does Hamas.”

The prime minister later told reporters, “This operation is just beginning but in the end, the tunnels weapon, in which Hezbollah has invested so much, will not exist and will not be effective.

“Israel expects an unequivocal condemnation of Hezbollah, the imposition of additional sanctions on Iran, a condemnation from the Lebanese government and a demand that it stop giving its approval for the use of its territory for these attacks against Israel.” 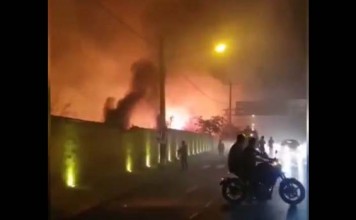