Ben Cohen and Jerry Greenfield on Sunday admitted in an interview on HBO that they have no plans to stop selling their ice cream in states like Texas that has recently gone all out in attempting to erase Roe v. Wade – the Supreme Court decision that effectively legalized abortion in the United States (Scoop: Ben and Jerry stumped by Texas and Georgia).

Axios’ interviewer Alexi McCammond asked during the interview: “You guys are big proponents of voting rights. Why do you still sell ice cream in Georgia? Texas – abortion bans. Why are you still selling there?”


Ben Cohen answered with a laugh: “I don’t know. It’s an interesting question. I don’t know what that would accomplish. We’re working on those issues, of voting rights. … I think you ask a really good question. And I think I’d have to sit down and think about it for a bit.”

It’s true that Cohen and Greenfield have long since sold their Ben & Jerry’s mega-successful ice cream company to Unilever, but their opinion still matters. As in their NY Times op-ed (We’re Ben and Jerry. Men of Ice Cream, Men of Principle.), where they clearly opined:

The company’s stated decision to more fully align its operations with its values is not a rejection of Israel. It is a rejection of Israeli policy, which perpetuates an illegal occupation that is a barrier to peace and violates the basic human rights of the Palestinian people who live under the occupation. As Jewish supporters of the State of Israel, we fundamentally reject the notion that it is anti-Semitic to question the policies of the State of Israel.

OK, so why not do the same in Texas and Georgia? When pressed on the fact that the great State of Texas continues to enjoy abundant supplies of their ice cream despite its harsh limits on women’s access to abortion (the new law encourages Texans to sue in civil court even the Uber driver who drove the pregnant patient to an abortion clinic), Cohen admitted: “By that reasoning, we should not sell any ice cream anywhere. I’ve got issues with what’s being done in almost every state and country.”

Thank you, Mr. Cohen, for finally getting why half a million Jews are upset because you singled them out in your boycott, or, more correctly, vehemently supported your former company’s boycott – but didn’t touch anyone else, when in reality a Jewish or an Arab woman can seek a legal abortion in the Jewish centers of Judea and Samaria without fear of state harassment.

But Greenfield came up with an excuse: “One thing that’s different is that what Israel is doing is considered illegal by international law. And so I think that’s a consideration.”

So we took a look at the list of countries where Ben & Jerry’s is sold and found Malaysia, where, according to the US government’s 2020 report, there are significant human rights violations, unlawful or arbitrary killings by the government or its agents; reports of torture and cases of cruel, inhuman, or degrading treatment or punishment by the government; harsh and life-threatening prison conditions; arbitrary detention; problems with the independence of the judiciary; arbitrary or unlawful interference with privacy; restrictions on free expression, the press, and the internet, censorship, site blocking, and criminal libel laws; substantial interference with the rights of peaceful assembly and freedom of association; restrictions on and intolerance of religious freedom; restrictions on freedom of movement; serious acts of corruption; lack of investigation of and accountability for violence against women; trafficking in persons; violence against transgender persons; criminalization of consensual adult same-sex sexual activities; and child labor.

Another place where you can gulp down as much Ben & Jerry’s ice cream is the United Arab Emirates, where according to the same US government, same 2020 report, there is torture in detention; arbitrary arrest and detention, including incommunicado detention, by government agents; political prisoners; government interference with privacy rights; undue restrictions on free expression and the press, including criminalization of libel, censorship, and Internet site-blocking; substantial interference with the rights of peaceful assembly and freedoms of expression and association; the inability of citizens to choose their government in free and fair elections; and criminalization of same-sex sexual activity, although no cases were publicly reported during the year. The government did not permit workers to freely associate, bargain collectively, or join independent unions and did not effectively prevent physical and sexual abuse of foreign domestic servants and other migrant workers.

Have an ice cream cone maybe, before your execution?

Do you know where else the Ben & Jerry’s ice cream is plentiful? Romania, where significant human rights issues included: cases of cruel, inhuman, or degrading treatment or punishment by the government; widespread official corruption; lack of investigation and accountability for violence against women and girls; and crimes of violence targeting institutionalized persons with disabilities and members of ethnic minority groups.

You want sprinkles with that?

Did you know Ben & Jerry’s ice cream is sold in Brazil? And did you know that the US government reported in 2020 that in Brazil there are unlawful or arbitrary killings by police; harsh and sometimes life-threatening prison conditions; arbitrary arrest or detention; violence against journalists; widespread acts of corruption by officials; lack of investigation of and accountability for violence against women; violence or threats of violence motivated by anti-Semitism; crimes involving violence or threats of violence targeting members of racial minorities, human rights and environmental activists, indigenous peoples and other traditional populations, and lesbian, gay, bisexual, transgender, or intersex persons?

Do you know who else breaks the law, right here, in the United States? Why it’s the Ben & Jerry’s ice cream company. As Alexi McCammond noted in the HBO interview, thirty-five states in the U.S. have anti-Israel boycott laws. At least four of them have already punished the company or are planning to, by divesting from Unilever, Ben & Jerry’s parent company. One of them is New Jersey, home of Unilever’s headquarters.

Well, Greenfield believes those states’ decisions are based on “misinformation,” and insists that “Ben & Jerry’s and Unilever are being characterized as boycotting Israel – which is not the case at all. It’s not boycotting Israel in any way.” Only half a million Israeli Jews.

In the end, Ben Cohen and Jerry Greenfield are giving hypocrisy a bad name. Their use of the boycott is based not on reason or moral consistency but on pure, blinding contempt for their fellow Jews. We’ve had their kind since our unlucky sojourn in Egypt. Whatcha gonna do. 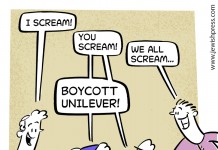 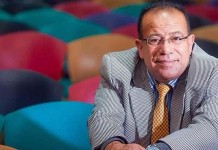 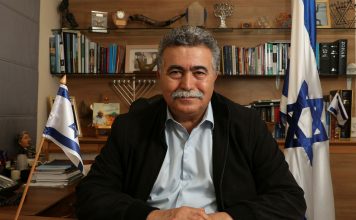 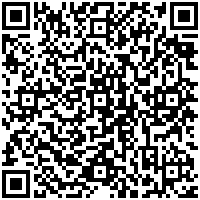