German Foreign Minister Annalena Baerbock visited Israel on Thursday on her first stop of a tour of the Middle East and met with Prime Minister Naftali Bennett and Foreign Minister Yair Lapid. Baerbock laid a wreath at the Yad Vashem Holocaust memorial in Jerusalem, where she said it was the “unconditional obligation” of the new generation of Germans to keep the memory of the Holocaust alive, as there are “fewer and fewer contemporary witnesses among us.”

She added that “it is our responsibility to raise our voices against antisemitism, against hatred and agitation, against exclusion and violence, so that such a crime against humanity is never repeated.”


Here’s the thing, though: a few hours earlier, at a joint press conference with minister Lapid in Tel Aviv, Baerbock said the nuclear talks with Iran are entering their “final phase” and insisted that a return to the 2015 nuclear agreement would make the Middle East safer.

If you’re Jewish, you’ll always find it difficult to hear a German politician talk about a “final phase.” We are a nation with an abnormally long memory, and when a German says “final,” we inevitably hear “solution.” Especially when the final thing she’s so happy about has to do with removing economic sanctions from a terrorist state that’s sworn to eliminate us and has invested blood and treasure in making good on it.

Prime Minister Naftali Bennett told his guest that signing a nuclear agreement with Iran would be a mistake that would endanger the entire region. He also emphasized that a target date must be set for the conclusion of the negotiations since their extension, even as the enrichment of uranium continues, only serves Iranian interests.

He could have just said that thing he does about taking care of the Iranian threat ourselves. It’s just as effective in influencing the talks in any way but helps Israel retain some dignity.

Minister Baerbock wrote in the Yad Vashem guest book that “Yad Vashem reminds us to hear the voice of those who experienced the horror themselves and to pass on their words. As the mother of two daughters, my breath tightens in my throat thinking about the millions of children who were murdered.”

Not so much, apparently, about the children who will be murdered should Iran be allowed to spread its venom around the region as it continues to do in Syria, Lebanon, Yemen, Saudi Arabia, and the Gulf States.

Deutsche Welle, the German public broadcaster whose Arabic programming has become contaminated with proven antisemites, reported that before leaving for Israel, Baerbock said Germany would stand by its “special historical responsibility” for Israel’s security and “continue to make contributions in solidarity for this.”

Of course, they will.

Baerbock used the S-word one more time on Thursday, insisting a “two-state solution” would be “the best option” for Israel and the PA. It’s a funny notion, coming from a politician whose country had endured a “two-state solution” for half a century until it was liberated from its oppression. Oh, and, naturally, as a devoted friend of the Jews, the German foreign minister “criticized Israeli settlements being built on Palestinian-claimed territory in the West Bank as a threat to the peace process.”

“We have a clear position on settlement construction. We consider it harmful and incompatible with international law,” Baerbock said.

So, according to German foreign policy, a peaceful solution between Israel and the PA would necessitate the deportation of half a million Jews.

Nothing they haven’t done before… Back in the 1940s, they called it “Judenfrei” – free of Jews. Because their presence is “harmful and incompatible with international law.”

Baerbock also visited Ramallah that same Thursday. Busy woman. According to WAFA, PA Chairman Mahmoud Abbas told his German guests that “the Palestinian side would not accept, under any circumstances, a continuation of the current situation, whereby Israel continues to consolidate its occupation and racist practices in the territories occupied since June 1967.”

Baerbock did not protest her host’s calling Israel racist, presumably abandoning that whole sentiment that “it is our responsibility to raise our voices against antisemitism, against hatred and agitation, against exclusion and violence.” Instead, she “reiterated Germany’s support for peace based on the two-state solution, the United Nations resolutions while pledging to continue providing economic support to the Palestinians.”

On Thursday night, Baerbock crossed over to Jordan. Saturday will be all Egypt. All in all, a good visit. 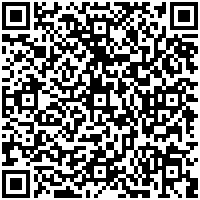