“Yesterday’s victory was not about counting how many demonstrators showed up and arguing about it,” tweeted Eldad Yaniv, an odd bird in Israel’s leftwing politics who has dedicated the last decade to unseating Prime Minister Benjamin Netanyahu using every means at his disposal: mass media, lawsuits, and demonstrations.

Commenting on Saturday night’s anti-Netanyahu mass rally in front of the Tel Aviv Museum, Yaniv stressed: “The victory was about Hadash party demonstrators who showed up and applauded Bogy (former DM Moshe Ya’alon – DI). Yesterday’s victory was in the full partnership with [Hadash-Ta’al chairman Ayman] Odeh. It was in the understanding that the turnover government will have Arabs in the coalition. The victory is in seeing how Netanyahu’s regime is terrified that we are no longer afraid of Arabs. It’s so simple”

Yaniv was on the team that led Ehud Barak’s campaign in the 1999 elections. After Barak’s victory, Yaniv served as the Prime Minister’s chief of staff. Between 2002 and 2006 he was the Labor party’s legal council. In December 2018 he left the Labor Party, slamming the door behind him.

His message is realistic, following a brutal campaign in which Israel’s left was mostly fearful of standing by its traditional pro-Arab positions. Yaniv knows there is no way for the Jewish left, from Meretz to Kachol Lavan, to win without the Arabs, and he, for one, urges a marriage.

“Tomorrow there are repeat elections,” he tweeted Sunday morning. “Netanyahu will return stronger because Kahlon has been erased, plus there are the 300,000 votes of Bennett and Feiglin (which didn’t make the threshold cut – DI). Liberman will also benefit.”

“The turnover government will be elected only if out of 900,000 eligible Arab voters, 800,000 will show up. Will they? If they knew it was a true partnership [they will]: [Dr. Ahmad] Tibi will be 1,000 times better as health minister than Litzman. And Odeh 1,000 better as interior minister than Deri. Do not panic. Dream and hope,” Yaniv sermonized.

It’s still difficult to envision cooperation between Benny Gantz—whose campaign videos featured a counter running up how many Arab terrorists he killed in the 2014 Gaza War, and the Arab parties. But these are precarious times, and right now, as Netanyahu is still desperately trying to bridge a coalition that includes Liberman and the Haredi parties, Yaniv could edge the left to victory. 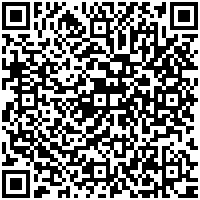