Jerusalem Police detectives uncovered a lab that was used to produce explosive devices in a residential building in the Sanhedria neighborhood of Jerusalem, News12 reported Wednesday morning (פרסום ראשון: מעבדת נפץ נחשפה בלב שכונה במרכז ירושלים). Two brothers, aged 14 and 18, were arrested on suspicion of operating the lab. Their mother is suspected of engaging in drug trafficking along with her boys. An indictment is expected to be filed against them in the coming days.


When the detectives raided the apartment, they found a pipe bomb near a gas stove. Had the bomb been activated, it would have caused multiple deaths in the building as well as property damage.

In their interrogation, the two brothers revealed that they intended to sell the explosive device to criminals for thousands of shekels.

Jerusalem Police claim, based on several indications, that the two brothers had assembled and sold similar explosive devices to criminals in the past. The investigation also revealed that another occupation of the two brothers, this time with their mother, was drug trafficking. A prosecutor’s statement regarding this case was filed on Monday and an indictment will be filed against all three family members in the coming days.

Kikar HaShabbat reported last week that investigators from the Police Jerusalem District Central Unit raided a Haredi family’s apartment in Sanhedria in search of drugs, based on intelligence they had received. During the search, the police found the pipe bomb and arrested the mother, her two sons, and a third person who was in the apartment. Their detention has been extended periodically by the court.

The four are suspected of possession and manufacture of weapons and careless handling of explosives; the mother and her boys are also suspected of drug-related offenses.

Jerusalem Magistrate’s Court Judge Adi Bar-Tal ruled that there was reasonable suspicion of criminal violations of the highest degree, which provided a statutory reason for extended detention.

Attorney Ariel Atari, defending the fourth suspect, told Kikar HaShabbat: “My client was a random passer-by and had nothing to do with any explosive device or an atomic bomb. In the absence of evidence, I do not doubt that my client will light the fifth Chanukah candle at home.”

We don’t know about the Chanukah candle, but it appears that since there’s no fourth suspect in Wednesday’s report, Attorney Atari is pretty good at what he’s doing. 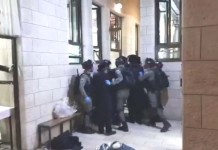