Severe clashes broke out Thursday night at the Yeshuat Yaakov Shtiebel in the Haredi neighborhood of Mea Shearim, Jerusalem, where a large police force attempted to close down the place to worshipers. The police were attacked fiercely, and in response threw shock grenades inside the compound. As a result, two young girls who were in the Mea Shearim market were injured. One was evacuated to Hadassah Ein Kerem Hospital.


Restarting the Minyanim
Meanwhile, according to Kikar HaShabbat, at the request of Shas Chairman Aryeh Deri, Prime Minister Benjamin Netanyahu on Thursday night ordered staff to draw plans for renewing minyan prayers as part of the return to routine in the wake of the coronavirus epidemic.

Meah Shearim Protest
The incident in Mea Shearim began with police entering Shabbat Square in Jerusalem, at the junction of Mea Shearim and Ezekiel Streets, where a group of Haredi extremists protested against the coronavirus restrictions on prayer and Torah study outside the home.

Police chased the illegal protesters to synagogues in the center of the neighborhood, where the officers were trapped as several dozen extremists attacked them and threw various objects at them.

According to several reports, the crowd threw eggs at the cops, which raised a sigh of astonishment among Israeli TV news viewers, seeing as the country experienced a severe shortage of eggs throughout the holiday.

The escalation of hostilities between police and dozens of extremist Haredim began following the arrest of the son of Rabbi Yaakov Meir Shechter, a prominent leader and teacher in the Breslov Hasidic movement in Israel.

For the record, Rabbi Shechter is a well-known kabbalist and the rosh yeshiva of both the main Breslov Yeshiva in Mea Shearim, and the Non-Breslov Shaar Hashamayim Yeshiva in Mekor Baruch. According to Wiki, his teachings explore the challenges of life and the pursuit of spiritual growth. Probably not with eggs and shock grenades.

The spiritual devotees argued that “many synagogues are open around the country, but the police insist on coming here as a provocation.” But the fact is that throughout Israel, the vast majority of synagogues are closed under the Health Ministry’s regulations.

The Jerusalem Police Spokesperson issued a statement saying: “At this time, a few dozen protests are taking place in the Mea She’arim area of ​​Jerusalem, during which they violated the public order and threw eggs and stones at the police who are acting to stop the rioters. So far, police have arrested 10 of them, who have been taken in for questioning.”

According to Kikar HaShabbat, the Haredi extremists intend to intensify their attacks on the Jerusalem District Police in their pursuit of spiritual challenges.

Exit Strategy
During the Ministerial Committee on the coronavirus special session Thursday debating an exit strategy from the crisis gripping the economy and the education system, Interior Minister Aryeh Deri proposed allowing small, open space prayer minyanim. Deri suggested those prayer meetings can be held while adhering to strict rules of no more than ten to 15 worshipers, out in the open space, maintaining the six-feet social distancing rule.

Deri told his fellow ministers that “beyond the physical food, it is necessary to take care of the spiritual food of the public who practice praying in a minyan.”

The Ministerial Committee on things corona on Thursday approved the renewed curfew on neighborhoods in Jerusalem and Bnei Brak as of 6 PM – through Monday. According to the decision, the closure of Bnei Brak will be significantly reduced, and the restrictions will only apply to entering and exiting the city by public transport.

Concurrently, the City of Bnei Brak has pledged to ship 700 coronavirus patients to quarantine hotels in an attempt to prevent a rise in the infection rate within the city.

If the honorable reader is just a little bit familiar with Jerusalem, he or she already knows that these shut-off areas are also the parts of Jerusalem where it’s not recommended to enter in one’s car on Shabbat…

There’s nobody here but us Haredim… 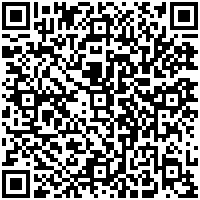