Last September, Hebrew University of Jerusalem researchers Prof. Liran Carmel and Dr. David Gokhman captivated the science world with their reconstruction of a Denisovan, the mysterious human species that lived 100,000 years ago but disappeared. Now, Science magazine, which has named nine scientific advances as runners-up for its 2019 Breakthrough of the Year, on Friday announced that their number one 2019 People’s Choice for Breakthrough of the Year is “Face to face with the Denisovans” (scroll down to the article) or as the magazine’s story described it: “Ancient DNA puts a face on the mysterious Denisovans, extinct cousins of Neanderthals.”

Carmel’s and Gokhman’s model relied on DNA from the barest of remains – just a pinky bone – and gave the world a glimpse of this nearly unknown ancestor of modern-day humans. After an initial round of competition that included more than 23,000 votes, Carmel—the only Israeli researcher to be nominated—made it to the final round and ultimately prevailed over three other finalists.

Carmel shared, “We are deeply moved by this honor and grateful to those who supported us. It’s amazing how scientific discoveries—even those relating to people who lived more than 100,000 years ago—still captivate the imagination of folks around the world.”

And you, The Jewish Press Online readers, helped get Israel’s top university over the top, when you responded to our call on December 6, “Already a Finalist, Hebrew U Needs Your Vote to Win Science Magazine’s Breakthrough of the Year.” 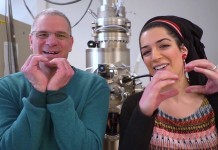 Watch: Hebrew U. Embraces Asian Students in Wake of Coronavirus