Yamina chairman Naftali Bennett is going to be the first religious Jew to serve as prime minister of Israel, but judging by the past two weeks, his job would be less like politics and more like plate juggling, and with his tiny, nickel yarmulke he’s probably going to have to pick up that thing off the floor a lot of times. As things are shaping up, it’s Bennett against everyone else in the “change government” coalition, with Bennett enjoying the rare pleasure of fighting for control within, while being the subject of unprecedented, raw hate from the outside.

The most recent episode was reported by Channel 13 News: one of the operating principles of the Bennett-Lapid coalition is that all controversial issues must first be debated within the group and that each one of the partners has veto power over every topic, particularly the crucial ones such as the settlements and the “peace process.” According to Channel 13, Blue&White chairman and Defense Minister Benny Gantz who just came back from meetings in the White House was asked by Bennett if the subject of settlements freeze had been raised, and Gantz replied that yes, and added that President Joe Biden wants to pick up the talks with the Palestinian.


Now, technically Gantz went to Washington as defense minister in the Netanyahu government, so Bennett can’t quite accuse him of betraying the most fundamental agreement of the Lapid-Bennett coalition, where Gantz is slated to carry on as DM. But the insult was clear, and the message to the incoming PM from Gantz was: you’re not the boss of me.

But we haven’t even scratched the surface. On Tuesday, Israel Hayom reported that the next Transport Minister and Labor chairwoman Merav Michaeli plans to cut by 50% the road works in Judea and Samaria. Can she do it on her own without the consent of her right-wing coalition partners? We’ll find out.

Here’s another humiliation for Bennett, which he said was rain: in a Tuesday meeting at the home of New Hope chairman Gideon Sa’ar, it was decided that Sa’ar’s number two, Ze’ev Elkin, slated to be Housing Minister, agreed to also fill the job of liaison minister between the government and the Knesset. In the press release that followed, the politically savvy Elkin was described as the new white hope of the incoming government, especially when it comes to passing a budget.

The humiliation part is that governments don’t need a liaison minister. They have a coalition whip, who is picked from the ranks of the PM’s party. And Bennett just appointed a new coalition whip, Yamina MK Idit Silman. But behind closed doors, his buddies Sa’ar and Lapid forced him to accept someone who would reign above his whip.

Finally, the “change” bloc is expected to debate on Wednesday a bill to restrict the tenure of prime ministers, clearly targeting Benjamin Netanyahu. And while New Hope, Yesh Atid, and Israel Beiteinu are pushing for a stricter, borderline-penal bill, with a cooling period that would mean barring Netanyahu from running to the Knesset altogether for four years, Yamina wants a softer bill. They agree to the two-term, 8-year limit, but see no justification to prevent Netanyahu from running for the Knesset as a rank and file Likud member.

A Yamina representative told Channel 12’s political reporter Amit Segal: “No, there was not and will not be an agreement regarding the prevention of running for the Knesset. This is a proposal that came up, was not agreed upon and neither will it be.”

We are beginning to see the reality of assigning the role of prime minister to the leader of a six-member Knesset faction. At best, Bennett will be primus inter pares (first among equals). At worst he will be a short-lived joke.

But as we reported on Tuesday (Lapid’s Coalition Deal Keeps Netanyahu Out, Handcuffs Bennett, Favors Arabs, Reform), Bennett is stuck in this SRO apartment, with or without heat and hot water. The coalition agreement stipulates that Bennett will not be able to hold any other ministerial position, not even that of a deputy minister, should the new government be replaced as a result of a no-confidence vote in the Knesset.

Yes, Naftali, it’s yet another plate you’ll have to juggle, and you’re not even in office yet – watch that yarmulke… 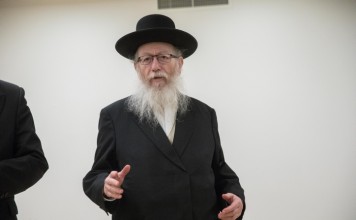