Police on Friday detained for questioning a suspect involved in a violent incident documented Thursday night on TikTok. The short video clip which was later published on Twitter and Facebook as well, shows two Haredi young men talking while traveling on the Jerusalem light rail when, suddenly, an Arab standing next to them slaps one of them with great force.


The 21-year-old suspect from the Beit Hanina neighborhood will be brought to court today, and police are expected to request an extension of his detention.

Transport Minister Miri Regev said in response: “I was shocked to see tonight the video of the attack on the young yeshiva student, on the light rail in Jerusalem. I instructed the National Public Transport Authority to cooperate with the Israel Police to bring about a speedy investigation of the incident and the application of the full severity of the law against those responsible for the attack.”

United Torah Judaism chairman MK Moshe Gafni said in response to the video that “law enforcement agencies and Israel Police must act with all their might to catch this offender, who carried out an anti-Semitic attack on yeshiva students.”

Gafni added: “I will talk to Minister of Internal Security Amir Ohana to ask that he give priority to the case, catch the offender, and put him behind bars to prevent the recurrence of such serious cases.” 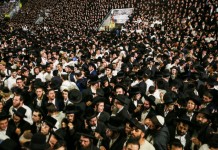