Haredi Blue&White MK Omer Yankelevich, who occupies the 23rd slot on the party’s list for the September elections, on Sunday visited the Shcheransky Teachers’ Seminar in B’nei B’rak, where seminar staff awarded her the teaching certificate she had earned at the seminar 20 years ago.

MK Omer Yankelevich, an attorney, educator and social activist, is co-founder of “Just Begun Foundation,” sponsoring social initiatives to help integrate peripheral and marginalized populations in Israel, with an emphasis on Haredim. She returned to her alma mater as an MK to help the institution, whose certificate of paramedical studies is no longer accepted by medical schools in Israel.


“As a seminar graduate, I am excited to return here, within the walls of this institution that provides such a spiritual basis for life,” Yankelevich said.

MK Moshe Gafni of United Torah Judaism was deeply offended, seeing as the honorable MK belongs to a party he considers an enemy of Haredi Jews in Israel. Gafni hastened to send a letter of condemnation to the Seminary’s declaring:

“I was shocked to hear that a Knesset member of a secular party whose goal is to harm all that is holy and precious to the people of Israel visited and was received with great respect by the management of the seminar, a contemptuous and shameful thing. Rabbi [Binyamin] Shcheransky zt’l, who was a guardian of proper education, would not have allowed such a thing.”

Omer Galinsky-Yankelevich received her teaching certificate at the Haredi Gateshead seminary for women in England, where she also taught. She regularly defends her Haredi sector against the Israel Women’s Network and other feminist groups that vilify Haredim for gender segregation.

In 2019, Yankelevich was invited by Benny Gantz to join his Israel Resilience Party, which later became part of the Blue & White slate for the April 2019 Knesset election.

Gafni, who serves as chair of the Knesset Finance Committee, could avoid the visit that offended him so much by helping the seminary retain its status vis-à-vis Israeli medical schools, seeing as the health portfolio in Netanyahu’s government is held by Gafni’s UTJ colleague Yakov Litzman. 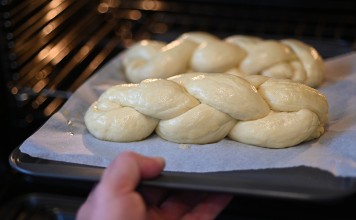 The Mitzvah And Tradition Of Baking Challah For Shabbat