Roni Alsheikh, who served as Benjamin Netanyahu’s General Commissioner of the Israel Police from 2015 to 2018, assisted senior members of the Black Flags Protest movement regarding dealing with the police, Channel 13 News revealed Monday night (חשיפה: רוני אלשיך ייעץ לשניים ממובילי מחאת הדגלים השחורים). The Black Flags members believed the now-ousted prime minister posed a tangible threat to Israel’s democracy and to what they broadly defined as the values inherent in Israel’s Declaration of Independence.

On their Facebook page, the Black Flags stated: “We believe in transparency and integrity and our activities have been made possible with the help of donations from private individuals.” Now it appears that one of those private donors was the man who helped turn Netanyahu into the defendant in three criminal indictments, and who was denied a second term as police commissioner.


According to Channel 13 News, since the summer of 2019, Alsheikh advised the protesters on several occasions, most notably two senior members of the movement whom he knows and has befriended. The former commissioner provided information and advice over the phone on dealing with the police and police behavior—since the beginning of the protests.

It should be noted, however, that the Alsheikh counseling was done voluntarily, and he did not attend demonstrations in person nor participated directly in any meetings of the movement.

The former commissioner’s associates said he had helped his friends because they were friends, and not as a sinister plot to unseat anyone residing on Balfour Street in Jerusalem. Likud, on the other hand, told Channel 13 News that “it’s now clear to what extent the invention of the cases against Netanyahu was an attempted political impeachment through a criminal process that was tainted from the first moment by Alsheikh.”

Perhaps. The truth is probably somewhere in the middle: Alsheikh counseled Bibi’s enemies because of his incredibly toxic relationship with the PM. But the criminal indictments, which no longer look as solid as they used to, required the contributions of more than just a frustrated police commissioner. 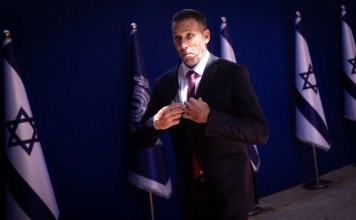