North Korea has succeeded in developing a “monster” missile capable of striking any part of the continental United States, South Korean and other military analysts determined following the launch of the Hwasong-15 intercontinental ballistic missile (ICBM) last Wednesday.

A South Korean defense ministry spokesperson told Reuters on Friday the ICBM appeared to be a new type of intercontinental ballistic missile capable of flying more than 8,080 miles (more than 13,000 kilometers), putting the continental United States well within range.

The most advanced missile so far, the Hwasong-15 also shows Pyongyang appears able to deliver a nuclear payload anywhere in the United States, and is perhaps only two or three more test launches away from being “combat ready,” analysts say.

In a statement from Pyongyang, North Korea’s military said the Hwasong-15 was “capable of carrying a super-heavy nuclear warhead,” adding that the new missile has “much greater advantages in its tactical and technological specifications and technical characteristics than (the) Hwasong-14.”

The Hwasong-15 is considerably larger than its predecessor, the Hwasong-14, and it is believed the new missile can deliver a moderately-sized nuclear payload to any city on the United State mainland. It is a two-stage, liquid-fueled ICBM, with the first stage powered by a pair of engines sharing the same external features found on the Hwasong-14 single chamber engine.

The estimated mass of the missile is between 40 and 50 metric tons, with the total thrust generated at lift-off about 80 tons of force. The configuration of the second stage is unknown, though the overall size suggests it contains 50 percent more propellant than the Hwasong-14, according to military analysts.

The Hwasong-15 also has a new steering mechanism, according to the US-Korea Institute at Johns Hopkins SAIS “38 North” website, and each of its main engines are mounted on a slotted gimbal that allow them to be reoriented in one dimension, to control the direction of the exhaust gases, thus providing control.

Given the above data, it is believed the Hwasong-15 can deliver a 1,000 kilogram payload to any destination on the U.S. mainland; since North Korea has very likely already developed a nuclear warhead weighing under 700 kg, the United States now faces an existential threat from Pyongyang.

U.S. Ambassador to the United Nations Nikki Haley warned that the launch “brings the world closer to war, not farther from it… We have never sought war with North Korea and still today we do not seek it. [But] if war does come, it will be because of continued acts of aggression like we witnessed yesterday,” she pointed out. “And if war comes, make no mistake, the North Korean regime will be utterly destroyed.”

Analysts say they expect another missile test from North Korea shortly, this one to be the Pukguksong-3, a submarine-launched ballistic missile that is rapidly reaching completion.

Israeli officials are still watching closely as well, to see whether North Korea is exporting its latest technology, or that which it’s developed in more recently, to Iran and/or its terrorist proxy groups along Israel’s borders.

Earlier this year, senior North Korean officials traveled to Tehran to attend the inauguration of Iranian President Hassan Rouhani at the start of his second term in office, and to open a new North Korean Embassy in the Iranian capital city. North Korea has in the past provided support for Arab nations fighting Israel in a number of conflicts. More recently, Pyongyang was involved in helping Syria build a nuclear plant in its territory; the facility was eliminated in an air strike blamed on the Israeli Air Force. Israel declined to comment on the matter. 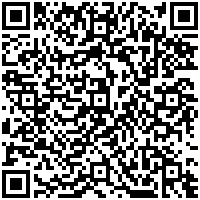