Prime Minister Benjamin Netanyahu on Tuesday night a special economic event attended by Argentinean businesspeople and an Israeli business delegation), in Buenos Aires that “the future belongs to those who innovate,” and “Israel is an innovation nation.”

“The power of innovation is endless,” the PM continued. “New industries are created from thin air literally. They create wealth very rapidly.”

“If you look to the ten leading companies in the world in terms of market capitalization ten years ago, five were energy companies, one, only one was IT-Microsoft,” he said. “Ten years later, one energy company is left, Exxon, on this list. It went from number one to number five, and five are IT companies. The power of the mind is the new wealth. The combination of big data, connectivity and artificial intelligence creates industries never heard of. This is a transformation that will change virtually every field of human endeavor. The distinction between hi-tech and low-tech is rapidly disappearing in everything, in sewage, water, milk, I just counted three liquids, but in anything, in agriculture, in transportation, in health, everything.”

“The future belongs to those who innovate,” he reiterated, “and therefore this meeting, this event today marks this change in our ability to cooperate, so I want to make it clear that we welcome all Argentinean companies to come to Israel with the Deputy President and subsequently later on in the second half of the year with the President and all Israeli companies to come to Argentina and share the ability to produce value.”

“I think this is evident for anyone dealing in business; it’s not evident for anyone dealing with governments. Governments typically do not think that wealth is created by private sector. They think that wealth is created by governments. But it’s not, it’s just spent by governments. To create value you need entrepreneurs and to create entrepreneurs you need freedom. Freedom, freedom from bureaucracy, freedom from over regulation, freedom from excessive taxes. This is an important message that I don’t need to bring to the President of Argentina because he understands it perfectly,” Netanyahu said.

Not concealing his pride, the PM, who in the past had been considered one of Israel’s best Finance Ministers, told the audience: “Now, Israel, as you know, overcame many odds but it could not achieve the growth that it has achieved today or have the companies that are represented here and many that are not if it didn’t make a substantial change, and that change was the product of a crisis, which I would like to tell you about.

We had a severe economic crisis in the year 2002-2003, and at that time I had the great misfortune of being appointed Finance Minister, not a good job to have in any time, but especially in a time of crisis. I came into the Israeli government when our economy was shrinking and we had tremendous unemployment, about 11% or 12%, that were very high for us. We had a major bank on the verge of collapse, we had many businesses closing down and there were basically two explanations that were common at the time in Israel about why we were in this crisis. One was, both of them were self-evident. The first was that the NASDAQ bubble, from which Israel was enjoying itself, had burst, collapsed. The second was that we had terror, and surely these two factors contributed to our economic crisis, but I didn’t think that they were really that important. They were important but on a secondary level.

“I thought something else was the problem, and I had about three weeks as Finance Minister to present a plan to the Israeli public, and I’m telling you this because over lunch I told this to [President of Argentina] Mauricio Macri and I’ll share with you what I told him and what I told the Israeli public then:

“I said that to explain the problem that we had, I described my first day in basic training in the Israeli paratroopers, and the commander put us all on a big parade ground and he put us in a straight line and he said, he pointed to the first man in the line, that was me, he said: You, Netanyahu, look to the guy on your right, put him on your shoulder. Then he said to the man further right: Put the guy next to you on your shoulder, and so on, and then he said: We’re going to have a special race. He blew the whistle, it was called ‘the elephant race’, and I had somebody by my side pretty heavy and I had to take a few steps. The guy next to me was the smallest man in the company and he had the biggest guy in the company on his shoulders, he collapsed on the spot and the third guy was a big guy, and he had a little guy on his shoulders and he took off like a rocket and won the race.

“I said in the international economies all national economies are pairs of a public sector sitting on the shoulders of a private sector, and in our case, the guy at the top, the public sector, got too fat and we were about to collapse like the guy next to me. So we had to do three things, first we had to put the fat man, the public sector on a diet, very difficult to do politically, okay? The second thing is we had to strengthen the guy at the bottom; we had to give him a lot of oxygen in his lungs so he could carry the load. How do you give oxygen? What is it that you need, the first thing that you need? Lower taxes, lower taxes. It’s the first thing that you need, okay? Now assuming we did that, which is very hard to do, you trim, you put the fat man on a diet and you lower taxes, you cut spending and you lower taxes and everything is ready, now you have this athlete, he has a relatively smaller public sector on his shoulders and he can run and win the race, right? Wrong. Because he starts to run and he hits a ditch, he crosses the ditch and he hits a wall, he climbs the wall and he hits a fence. These are called barriers to competition, barriers to the race. You have to remove that, so you have to do three things: control public spending or reduce it, lower taxes and reduce barriers to competition. This is in fact what we did, and we moved from roughly 1% negative growth to about 5% within a year, one year, and we stayed on that course basically for the rest of the time with the exception of 2008, between 4-5% growth.

“This is easy to say, very, very hard to do. There are oligopolies, there are monopolies, there are vested interests, there is bureaucracy. There is every reason in the world not to do this unless you have this conviction inside. I see that conviction in President Macri. This is why I think Argentina has a great future, a great future, and it could grow very rapidly and achieve things that were unimaginable. We in Israel are doing this. I want you know what we’re doing. Technology by itself does not do it. You can have enormously gifted people in technology. You can have the greatest scientists and you could have the greatest mathematicians and you can have the greatest physicists, I’ll tell you one country that had them — it’s called the Soviet Union. Didn’t do much, did it? But if you took one of these physicists and you brought him to Palo Alto, then within three weeks he’s producing tremendous value. Remember that the basic addition of value in an economy is given by the private sector. Unless you couple free markets or I should say freer markets, with technology, technology alone does not work. This is the fundamental change that we made in Israel. We couple technological capabilities with freer markets. This is what I think can be done here as well.

“In Israel this means that we create new industries from scratch. Once you have that environment, I’ll give you an example, Israel produces more milk per cow than any other cow in the world. You think it would be a French cow, Dutch cow, an American cow? No. It’s an Israeli cow, because it’s a computerized cow, every moo is computerized. We recycle 87% of our wastewater. The next country to recycle, the second country in the world, is Spain with 17%. We have 20% of the world’s global investment in private cybersecurity, 20%. Since we are 1/10 of 1% of the world population, this means we’re punching 200 times above our weight. It’s as if Israel were a country of 1.6 billion people. It’s not. We have a car industry today. We never had one but we have now. A car industry. You use Waze? Yeah? OK. Waze is an Israeli company. It was sold to Google for a mere $1 billion. Very stupid deal. It’s worth a lot more. But now, now we have a company in Jerusalem that was sold to Intel for $15 billion for autonomous vehicles, and we have 500 tech startup companies that receive each year $3.5 billion regular investment for automotive technology because transportation is changing. Transportation is changing, 85% of the value of the car within 10 years will be in software. Not in the body, not in the chassis, not in the wheels, not in the engine – but in the software. Cars are moving platforms for software. And so we’re moving into that. And I could tell you on this, as opposed to cyber, we had nothing to do with it. We didn’t do anything! It happened by itself. By itself! If you create the right business environment. And the same thing is happening everywhere.” 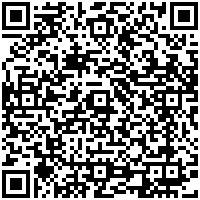