One Jew was wounded Sunday morning in an Arab terror attack at the entrance to Metzad, a hareidi-religious community of 535 people, located in the Gush Etzion block in Judea.

According to the IDF, “Initial reports suggest two assailants disguised as ultra-Orthodox men attacked the Israeli in Gush Etzion. The Israeli responded to the attack, firing towards the assailants before they fled the scene. Forces are currently searching the area for the perpetrators.”

Moments before, the victim exited his car due to the hail of rocks hurled at the victim’s car and those already on the road. One of the terrorists then attacked the Israeli, stabbing him in the chest, and then fled.

The 55-year-old Israeli victm was treated at the scene and then rushed to Hadassah Ein Kerem Medical Center in Jerusalem, where he is listed in fair condition.

At about the same time, Border Guard Police officers detained an Arab during a routine search on Sunday morning as he tried to cross a checkpoint at the Tapuach Junction.

The suspect was held for questioning by security officials.

TPS /Tazpit contributed to this report. 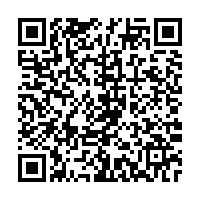