Just outside the gates of the Old City of Jerusalem, a new yeshiva sponsored by the Ateret Cohanim organization is set to open by the end of the month.

It will be the first all-mechina pre-army Torah Learning Center to be established in Jerusalem.


‘Otzmat Yerushalayim,’ the first such venture on Sultan Suleiman Street, is housed in the Israel Post Office and Bezeq building. In the same building one can also find offices for the Border Police and the national Israel Police.

The building is located at the main intersection near the Flowers Gate of the Old City, also known as Herod’s Gate, according to the yeshiva’s website.

The yeshiva will be open to some 300 pre-army Jewish students in an area that leftist Jerusalem municipality representative Meir Margalit fears is “a sure recipe for violence. This is a very strategic site and there’s a potential her to cause serious disruptions in civic life in this city,” he told Reuters.

Boys from the pre-army Academy of Otzem in Cholot Chalutza (also known as the Mechina from Atzmona in Gush Katif) are the first group to learn in the yeshiva.

The Otzem Academy will send groups of 30 students each to the yeshiva to learn for 7 to 14-day periods over the coming months, according to the statement posted on the yeshiva website.

Students enrolled in pre-army academies throughout the country will send their students to do the same, sponsored by donors locally and abroad.

Facilities include a Beit Midrash, dining room, kitchen and dormitory which can hold up to 30 students at a time. Attendees will participate in educational tours around the Old City in addition to their studies.

A formal “Chanukat HaBayit” – open house” ceremony – is expected to take place around the date of Yom Yerushalayim (Jerusalem Day), the holiday celebrating the reunification of Jerusalem, Israel’s eternal capital.

This year will mark the 47th year since Israeli soldiers took back Jerusalem from its Jordanian occupiers (in the 1967 Six Day War) and the barbed wire cutting the city apart was finally erased from the landscape.  Israel’s restoration and formal annexation of the remainder of the capital has not been recognized by the United States and by the international community.

At present, some 215,000 Jews live in the eastern part of the capital, which is also home to approximately 280,000 Arabs, most of whom hold Israeli identity cards and enjoy state social benefits, including comprehensive health care.

Biden Gives a Clinic on How NOT to Negotiate with Iran 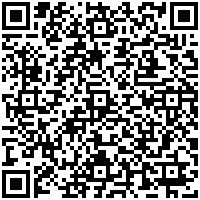