On Tuesday morning, Arab rioters on the Temple Mount who presumably found no more Jews or police to attack up there, began throwing stones down at the Jews who were engaged in their morning prayer before the Western Wall. One woman, age 73, was injured lightly and was rushed to Hadassah Ein Karem hospital. (Update: The woman was released from the hospital late Tuesday afternoon).

Once again this week Israel has taught the Arab rioters on the Temple Mount that crime pays, and violent crime pays double. Following two days of violent riots on the sacred grounds, during which Arab youths threw stones and fireworks at security forces, police on Tuesday morning banned the entrance of Jewish and all other non-Muslim visitors, which is what the violent mob was demanding in the first place.


The announcement about the banning of Jews came before the Arabs started throwing rocks down on Jewish worshipers by the Kotel.

The Arabs argued that there had been a status quo according to which on the final ten days of the month of Ramadan no non-Muslim was allowed to set foot on the ground where a scene from dream of the prophet Mohammad took place back in the seventh century (he never actually set foot there).

For two days straight, Arab rioters barricaded themselves inside the Al Aqsa mosque, where they stored stones and fireworks, determined to interrupt the peaceful routine of Jewish visits to the Temple Mount. As soon as the first visitors had entered, Muslim youths, some of them masked, burst out of the mosque, screaming stuff about the supremacy of Allah (He is, apparently, very big) and throwing stones at the frightened visitors and at police. Police and Border Guard pushed back the attackers, and enabled the continued visits.

Israel Police issued a communiqué Monday saying that any attempt to violate the order anywhere in Jerusalem, including in the Old City and on the Temple Mount would be handled “resolutely and firmly,” in order to maintain the status quo allowing members of all religions to be on the Temple Mount. “Jerusalem Police will use all the tools at its disposal to arrest the rioters and to prosecute them to the full extent of the law.”

Nekhtike Tug, goes the Yiddish adage, meaning, roughly, go find the stuff you lost yesterday, or, basically, it wasn’t happening. Because overnight Monday, according to an Israel Radio report, there were talks between the Netanyahu government and the Jordanians, whose Waqf association is the de facto ruler of the sacred compound, and a decision was made to bow to the will of the thugs one more time.

Let it be a lesson to them. 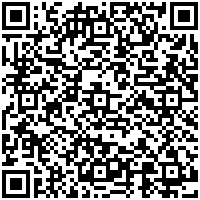