Police in Pawtucket, Rhode Island continue to investigate a hate crime after a big red Nazi swastika was found spray-painted on the welcome sign of Congregation Ohawe Sholam.

Worshipers found the swastika on Sunday. It was painted on the sign for the Kollel Center for Jewish Studies outside their Orthodox synagogue.


A news conference was held Monday morning by city and religious leaders, who condemned the vandalism.

“The police department will go through any neighborhood video, hopefully we can catch anyone coming from or leaving the scene,” said Pawtucket Police Chief Paul King. “We’re asking neighbors, we’ll check Facebook, but what we really need is the help of the public. If you thought you saw something that looked a little bit off – please notify us.”

“The vandalism that has occurred at Congregation Ohawe Sholam in Pawtucket is demonic and depressing,” said Bishop Thomas Tobin, head of the Roman Catholic Diocese of Providence.

“I’m angry and disgusted,” said U.S. Congressman David Cicilline (D-RI) . “This despicable act of vandalism has only one purpose – to intimidate members of our community and it won’t succeed.”

Congregation Ohawe Sholam president David Pliskin told local WPRI-TV in an interview that Holocaust survivors among the congregants found the graffiti to be a painful reminder of the past. “This is the kind of thing that makes your whole body roil inside if you’re a Jew,” he said. But for those who survived the death camps, “It’s like someone trying to stab you in the heart again.”

Pliskin rejected claims the graffiti might have been a childish prank. “This person clearly had some knowledge,” he told WPRI. “A lot of people draw the swastika with a cross, but this person has actually done it the way it was done on the Nazi flag, with an ‘X’.” He called it a hate crime.”

Nor has it been the first.

Last October, flyers were distributed just a few blocks from the synagogue with an illustration of a hooded man bearing a rifle, captioned, “Revolution is the only solution to Jewish pollution.”

But Pliskin also said the community has been incredibly supportive. One person gave a blanket to cover the sign. Another offered money to repair it.

‘The immediate result has been an outpouring of compassion and many acts of kindness from the entire community,” Pliskin said. ‘We should be thankful there are so many good and wonderful people around us.”

The city’s Department of Public Works has taken the sign off-site and is in the process of restoring it, according to WPRI. 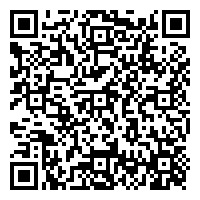