The UN General Assembly on Wednesday adopted six resolutions on “Palestinian and Middle East issues,” ranging from Jerusalem to the United Nations special information program on the question of Palestine. The good news is that Israel still has a smattering of friends at the UN: Canada, Federated States of Micronesia, the Marshall Islands, Nauru, Palau, and the United States (and Israel, of course) voted against; Australia, Cameroon, Honduras, Guatemala, Papua New Guinea, Paraguay, Tonga, and Vanuatu abstained. The rest, 153 world nations that include places where you plan to spend your vacation this summer or buy your car, condemned Israel as being responsible for most of the ills of the planet, especially the Middle East.

For instance, Haya al-Duraie, representing Kuwait which in 1991 expelled 400,000 Palestinians into the desert, expressed support for international efforts that were laying the foundation for security and stability in the region. “However,” the ambassador warned, “the faltering peace process continues to present a danger to the Middle East.”

There you have it.

The UN press release on the assembly votes, includes a section dealing with the “Situation in the Middle East.” One would expect this section to deal with the 500,000 Syrians who died and millions who were uprooted in the past six years; with the war between Shiites and Sunnis in Iraq; with Iran’s nuclear threat and its region-wide terrorism; with Egypt’s paralyzing poverty; perhaps with the discriminatory policies of Saudi Arabia. Alas, one would be wrong. According to the UN General Assembly, there are two main issues threatening stability and peace in the Middle East: Israel’s “occupation” of Jerusalem and Israel’s refusal to hand over the Golan Heights to the Assad Regime.

On Jerusalem, the draft resolution called for “respect for the historic status quo at the holy places of Jerusalem,” and in the spirit of respect referred to the focal area of contention only by its Arabic name, “Haram al-Sharif.” The Assembly reiterated its determination that any actions taken by Israel, “the occupying Power,” to impose its laws, jurisdiction and administration on the Holy City of Jerusalem “were illegal and therefore null and void and had no validity whatsoever” – note the double invalidation. It also called on Israel to “immediately cease all such illegal and unilateral measures” and stressed that “a comprehensive, just and lasting solution to the question of the City of Jerusalem should take into account the legitimate concerns of both the Palestinian and Israeli sides.”

At least they called it “Jerusalem” and not Al Quds. One point for the home team.

In its resolution on the “Syrian Golan” the Assembly, in the middle of a raging war between the murderous Assad regime that slaughters its own citizens and ISIS and Al Qaeda affiliates who murder everyone else, demanded that “Israel withdraw from all the occupied territory to the line of 4 June 1967 and called on all parties concerned to exert the necessary efforts to ensure the resumption of the peace process.” It should be noted that this example of raging idiocy received only 103 votes in favor, to 6 against (Canada, Federated States of Micronesia, Israel, Marshall Islands, Palau, United States), with 56 abstentions.

The Permanent Observer of Palestine – who could become the Palestinian Authority’s UN Envoy, should the Obama Administration pull a fast one (so far so good, though) – said the adoption of the six resolutions by an overwhelming majority of United Nations Member States was “a reflection of the longstanding international consensus in favor of achieving a just, lasting and peaceful solution to the question of Palestine,” and “a clear reaffirmation of the international community’s consensus on the two-State solution.”

He then added that “the despair and hopelessness of the Palestinian people is increasing as the fiftieth year of the illegal Israeli occupation approached.”

See you in fifty years?

The representative of Israel said the resolutions had not only failed to promote dialogue or build trust, they had also created an organizational infrastructure that had abused funding to allow anti-Israel activities to take place under the auspices of the United Nations.

She argued that supporting the resolutions and the inherent bias against Israel would not advance the cause of peace, but instead make peace harder to achieve. The “Special Information Program on the Question of Palestine” offers a misleading narrative of the region and circulates prejudiced materials under the banner of the United Nations, undermining the organization’s integrity and impartiality. It was baffling how the United Nations, which continued to face a severe budgetary deficit, had spent approximately $6.5 million a year on bodies that were dedicated solely to promoting the Palestinian narrative.

Loved the part about the resolutions “undermining the organization’s integrity and impartiality.” Who says Israeli diplomats have no sense of humor? 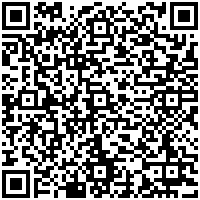