U.S. President Donald Trump says he is still “optimistic” about the prospects for peace between Israel and the Palestinian Authority — optimistic enough to send another delegation to the region for another round of talks with Jerusalem and Ramallah.

I look forward to returning to the Middle East soon with Jared Kushner & Dina Powell as we pursue peace. @POTUS is optimistic.

A lengthy statement from the White House on Saturday said Trump is “personally committed to achieving a peace deal between Israel and the Palestinians that would help usher in an era of greater regional peace and prosperity.

“He believes that the restoration of calm and the stabilized situation in Jerusalem after the recent crisis on the Temple Mount / Haram al Sharif has created an opportunity to continue discussions and the pursuit of peace that began early in his administration,” the statement read.

The delegation will also meet will leaders from Saudi Arabia, the United Arab Emirates, Qatar, Jordan, and Egypt in addition to Israel and the Palestinian Authority.

According to the statement, Trump is asking “that these discussions focus on the path to substantive Israeli-Palestinian peace talks, combating extremism, the situation in Gaza, including how to ease the humanitarian crisis there, strengthening [U.S.] relations with regional partners and the economic steps that can be taken both now and after a peace deal is signed to ensure security, stability and prosperity for the region.”

Trump remains clear, however, that at the end of the day direct talks are the only way to solve this conflict.

“While the regional talks will play an important role, peace between Israelis and Palestinians can only be negotiated directly between the two parties and the United States will continue working closely with the parties to make progress towards that goal,” the statement continues.

“President Trump has previously noted that achieving an enduring Israeli-Palestinian peace agreement will be difficult but he remains optimistic that peace is possible. To enhance the chances for peace, all parties need to engage in creating an environment conducive to peace-making while affording the negotiators and facilitators the time and space they need to reach a deal,” the statement concludes.

One assumes that naming summer camps after bloodthirsty terrorists like Dalal Mughrabi, and using the International Committee of the Red Cross, as well as millions of dollars from the annual foreign aid towards payment of monthly terrorist prisoner salaries and terrorist family subsidies would not be considered “creating an environment conducive to peace-making. . . ” 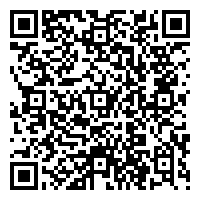