The International Criminal Court’s chief prosecutor, Fatou Bensouda, on Friday issued a statement saying: “In brief, I am satisfied that (i) war crimes have been or are being committed in the West Bank, including East Jerusalem, and the Gaza Strip; (ii) potential cases arising from the situation would be admissible; and (iii) there are no substantial reasons to believe that an investigation would not serve the interests of justice.”


Referring to the Palestinian Authority explicitly as the “State of Palestine” – an entity which does no exist, except in the heated imagination of numerous anti-Israel individuals – Bensouda stated: “As there has been a referral from the State of Palestine, there is no requirement to seek Pre-Trial Chamber’s authorization before proceeding to open an investigation, and I do not seek to do so.”

But, being in a generous mood and wishing to dot every i and cross every t, she conceded: “However, given the unique and highly contested legal and factual issues attaching to this situation, namely, the territory within which the investigation may be conducted, I deemed it necessary to rely on article 19(3) of the Statute to resolve this specific issue,” and so, “Earlier today, I therefore requested from Pre-Trial Chamber I a jurisdictional ruling on the scope of the territorial jurisdiction of the International Criminal Court (“ICC” or the “Court”) under article 12(2)(a) of the Rome Statute in Palestine.”

Article 12(2)(a) of the Rome Statute provides that the ICC may exercise its jurisdiction over a crime if the “State on the territory of which the conduct in question occurred” is a party to the Statute or has accepted the Court’s jurisdiction by a declaration.

The ICC was established by virtue of the 1998 Rome Statute. Its purpose is to prosecute individuals suspected of having committed war crimes, crimes against humanity, and genocide. Israel suspected that the ICC would serve as an instrument of lawfare against it, especially after an article was inserted into the Rome Statute defining a transfer of the population of an occupying nation to occupied territory as a war crime, even in the absence of force, incriminating Israelis settling in the liberated territories. Israel therefore decided not to ratify the statute or become a member of the ICC.

Aware of this conundrum, with a non-existing state filing ICC complaints against a real country which is not a member of the ICC, Bensouda stressed: “Specifically, I have sought confirmation that the ‘territory’ over which the Court may exercise its jurisdiction, and which I may subject to investigation, comprises the West Bank, including East Jerusalem, and Gaza. Such determination is made strictly for the purposes of determining the Court’s ability to exercise its jurisdiction and the scope of such jurisdiction under the Statute.”

Prosecutor Bensouda concluded: “It is necessary for this specific matter before the Chamber to be resolved without undue delay so that my Office can take the appropriate next steps accordingly.”

The above is seriously irking, but constitutes only the opening salvo in a battle that should not necessarily end in an Israeli defeat.

For one thing, at least until 2021, Israel will enjoy the loyal support of the Trump administration. On Friday, Secretary of State Mike Pompeo tweeted: “Today, the ICC prosecutor raised serious questions about the ICC’s jurisdiction to investigate Israel. Israel is not a state party to the ICC. We firmly oppose this unjustified inquiry that unfairly targets Israel. The path to lasting peace is through direct negotiations.”

Attorney General Avichai Mandelblit issued a statement critical of Bensouda’s statement, saying, “The principled legal position of the State of Israel, which is not a party to the ICC, is that the Court lacks jurisdiction in relation to Israel and that any Palestinian actions with respect to the Court are legally invalid.”

Mandelblit enclosed a detailed opinion, brilliantly clarifying why the ICC “manifestly lacks jurisdiction.” Here it goes, copy this one and read to your lefty friends around the Chanukah table (is that a thing?):

• Only sovereign states can delegate criminal jurisdiction to the Court. The Palestinian Authority clearly does not meet the criteria for statehood under international law and the Court’s founding Statute.

• The claim that the Palestinians have purported to join the Rome Statute does not meet, nor can it replace, the substantive test requiring criminal jurisdiction to have been delegated to the Court by a sovereign state with a defined territory.

• Israel has valid legal claims over the same territory in relation to which the Palestinians are seeking to submit to the Court’s jurisdiction. Israel and the Palestinians agreed, with the support of the international community, to resolve their dispute over the future status of this territory in the framework of negotiations.

• By approaching the ICC, the Palestinians are seeking to breach the framework agreed to by the parties and to push the Court to determine political issues that should be resolved by negotiations, and not by criminal proceedings. The Court was not established for such purposes, nor does it have the authority or capacity to determine such matters, especially in the absence of the consent of the parties.

The last paragraph should result in punishment to the PA, whose complaint to the ICC was a breach of the Oslo Accords to begin with. To start, the Netanyahu government must move swiftly to remove the illegal shantytown created in Khan al Ahmar by the PA and the European Union. And should the ICC empower the chief prosecutor to move on Israel, the Jewish State must respond with action: impose Israeli sovereignty in Judea and Samaria.

And for heaven’s sake, vote for Trump…

Marrying Nine Daughters With A Eulogy 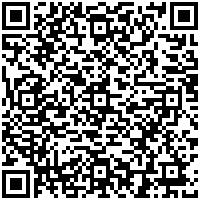