Thousands of Judea and Samaria residents were startled to discover on Sunday morning that central junctions throughout Judea and Samaria were decorated with PLO flags. The flags, hung on highway light poles in a manner befitting the visit of a foreign dignitary, generated hundreds of angry calls to municipal councils in the area from settlers who were certain this had been the doing of the gang from Ramallah. Images of the offending flags (in Area C, which is controlled by Israel) were quickly spread through the social media.

PA operatives did hang up PLO flags on street lamps in the past, on Route 1, near the disputed Khan al-Ahmar, which has been slated for demolition by Israel’s High Court of Justice.


According to the Regavim movement, it was behind the secret operation overnight Sunday, in which hundreds of flags were hung by several work crews on cherry pickers. The flags were hung along Route 60 from Gush Etzion to Mount Hebron, and along Route 5 in Samaria.

According to the Regavim statement, it decided to shock Israelis by illustrating what the future has in store for them should illegal Palestinian construction in Area C continue without interruption, which would allow for the establishment of a Palestinian State according to the Fayyad plan.

Salam Fayyad, the former prime minister of the Palestinian Authority, in 2009 came out with a plan called “Palestine: Ending the Occupation, Establishing the State,” to reform the PA and build new infrastructure in all of Judea and Samaria, to establish a “de facto Palestinian State,” ready to be sanctioned by world powers.

The Regavim operation Sunday morning is part of its wakeup-call campaign “Terror State Around the Corner.”

Regavim has recently cited disturbing data (Report: 28,000 Illegal Arab Structures Erected in Area C, Ushering Palestinian State) showing that the number of illegal Arab structures in Judea and Samaria has almost doubled in the last decade, from the start of Prime Minister Netanyahu’s second term in 2009. In 2009, the number of illegal structures in Area C stood at 29,784. In 2018, it has mushroomed to 58,435 structures.

Regavim CEO Meir Deutsch said in a statement, “We understand the anger of local residents who were exposed to our operation, but we also understand that a terrorist state is around the corner. The public in Judea and Samaria has fallen asleep at the wheel. The flags we planted will not determine the future of Judea and Samaria, but the tens of thousands of buildings built over the past decade and tens of thousands of acres of land that have been taken over by the PA with the assistance of European countries will certainly determine the future of Area C. It is time for the Israeli government to act to stop the Fayyad plan, not with words but with action. It is doable, and it is the order of the day.”

“The Regavim movement carried out an aggressive and provocative campaign aimed at awakening and swaying public sentiment about the rampant illegal building being carried out by the PA in Area C. We are uncomfortable with the threatening style of this stunt, and certainly don’t like to see PLO flags hanging in our area. At the same time, in our current reality, the government and decision makers must understand that we are approaching the point of no return.

Currently there are agricultural farms and entire communities being established by the Arabs under the auspicious of the PLO in Area C thanks to European funding. This is an insanity which impacts us on a national level. There is a need for an immediate and wide scale emergency operation by the IDF, the police, the Shin Bet, the Civil Administration and the Ministry of Defense, to halt this large-scale illegal construction by the PLO in Area C.” 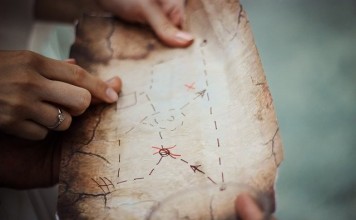