Former Labour leader and Labour member Jeremy Corbyn on Tuesday posted on his Facebook page a statement that was probably as close to an apology as one could hope for. And while the Daily Mail was probably quite off the mark when it ran the joyous headline, “Jeremy Corbyn FINALLY makes a groveling apology,” Corbyn at least admitted that his conduct had caused pain to the Jewish community in the UK.

Last month, I was suspended from the Labour Party, after 54 years’ membership and four and a half years as party leader.

On the day I was suspended I gave a broadcast interview to clarify what I had said in response to the EHRC (Equality and Human Rights Commission) report, and I also made a statement to the party to clear up any confusion about what I had meant, as follows:

“The publication of the EHRC report should have been a moment for the Labour Party to come together in a determination to address the shortcomings of the past and work as one to root out anti-Semitism in our own ranks and wider society. We must never tolerate anti-Semitism or belittle concerns about it. And that was not my intention in anything I said this week. I regret the pain this issue has caused the Jewish community and would wish to do nothing that would exacerbate or prolong it. To be clear, concerns about anti-Semitism are neither ‘exaggerated’ nor ‘overstated.’ The point I wished to make was that the vast majority of Labour Party members were and remain committed anti-racists deeply opposed to anti-Semitism. I fully support Keir Starmer’s decision to accept all the EHRC recommendations in full and, in accordance with my own lifelong convictions, will do what I can to help the Party move on, united against anti-Semitism which has been responsible for so many of history’s greatest crimes against humanity.”

I’m grateful to the many thousands of Labour party members, trade unionists, and supporters in Britain and around the world, who have offered their solidarity.

I hope this matter is resolved as quickly as possible, so that the party can work together to root out anti-Semitism and unite to oppose and defeat this deeply damaging Conservative government.


Back in October, when he was probably still in the early stages of grief over his disgrace – denial and anger – Jeremy Corbyn rejected the conclusions of the EHRC report on anti-Semitism in Labour, saying the problem was “dramatically overstated for political reasons” by his enemies and the media.

Corbyn hit Facebook back in October, too, and said he had been obstructed by party officials as he was trying to tackle the problem, regretting only that “it took longer to deliver that change than it should.”

Although the EHRC report did not blame Corbyn directly, EHRC lead investigator Alasdair Henderson said the pound stopped with him:

“As the leader of the party at the time, and given the extent of the failings we found in the political interference within the leader of the opposition’s office, Jeremy Corbyn is ultimately accountable and responsible for what happened at that time,” Henderson stated. 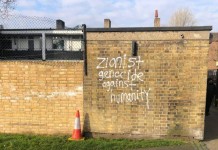 Report: 2021 Saw Record Number of Antisemitic Incidents in the UK