Joint Arab List Chairman Ayman Odeh on Tuesday told Army radio that his party would not recommend Blue&White chairman Benny Gantz to cobble the next coalition government unless Gantz expressed his opposition to the annexation of the Jewish settlements in Judea and Samaria.

“If we do not hear a very sharp statement from him against the transfer and the annexation there’s no way we would recommend him,” Odeh said, adding, “I want to hear from Gantz in the most explicit way that he opposes a transfer.”

The “transfer” in question has nothing to do with the old Zionist plan—conceived by both the left and the right back when both were significantly saner than they are today—to force Arab citizens of Israel and the PA on trucks that would take them across the river, to Jordan. This “transfer” is the name the anti-Trump plan camp in Israel has given a suggestion in the “deal of the century” of a territorial swap, with everybody staying put physically, but the borderline around the settlements would be stretched to Israel, while the thriving Israeli communities of the “Arab triangle,” between Hadera and Afula, would become part of the Palestinian state.

Needless to say, no Israeli Arab wants to find himself one morning under the rule of PLO gangsters, having grown up in a Western democracy.

“They (Blue&White – DI) are silent about the attack against the Arab population, the Netanyahu attack,” Odeh said. “Let Gantz say something. Does he think we’re in his pocket? No way.”

Odeh also said his list would not support “any government that would have [Israel Beiteinu Chairman Avigdor] Liberman in it. We have nothing in common with Liberman. Liberman is rightwing, he is the father of the Triangle transfer idea.”

He was, back when he was a happy-go-lucky part of the rightwing camp. Nowadays no one has any idea where Liberman belongs. But it’s clear that Blue&White together with the measly Labor-Meretz faction would barely amount to 40 seats in the next Knesset, never mind 61. They can’t hope to win a majority without both Liberman and the Arabs. Otherwise it’s only them and Likud, but Likud is led by Bibi Netanyahu, the left’s equivalent of a ham sandwich in Meah Shearim – and we’re back in the familiar dance of the past two, aggravating, debilitating, pointless elections.

Odeh told Army radio he believes his Joint Arab List would succeed in squeezing 16 seats out of the Arab voters whose best yield so far has been 13.

“We can reach 61 seats without Liberman,” he said. “We have started to get stronger, we will reach 15 to 16 seats. No one can succeed without us. We are challenging the system.”

At this point, they are also challenging the rules of mathematics: it would require Blue&White to get at least 36 seats; Labor-Meretz will have to get 10 seats; and the Joint Arab List must score at least 15 seats – two more than it had ever managed to bring.

The Joint Arab List is also unhappy with Gantz’s support for annexing the Jordan Valley, his general support for the Trump plan, and Blue&White’s support for disqualifying pro-terrorist MK Heba Yazbak.

Here’s a fun factoid: in January, MK Odeh told Haaretz his recommendation of Gantz to the president was merely a technical ploy to keep the prize from Netanyahu. Then he described his dream date with Gantz et al: “Gantz could turn our technical support into a substantial one if he changed his directions to be like those of the Rabin government in the 1990s. In that case, we would act the way we did then, and would secure a blocking bloc for him.” it means a Gantz government of only 45 or so members, protected from a vote of no confidence by the loyal Arab opposition.

That oughta make Blue&White’s rightwing flank delirious with happiness, once they’re done with the gnashing of teeth and similar clear expressions of intent. 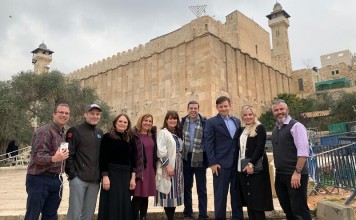