The meeting will take place in the Knesset while Prime Minister Benjamin Netanyahu still holds the president’s mandate to form a government. Gafni and Lapid have met each other in the past, but never publicly, because of the bad blood between the Haredim and Lapid. Back in 2013, when Lapid served as Netanyahu’s finance minister, he curtailed the government stipends to large families, a move that targeted mostly Haredi families. Lapid also led the “equal burden” initiative to force Haredi youth to enlist in the IDF.


Meanwhile, according to Israel Hayom, a political adviser named Shalom Shlomo, who used to work for Netanyahu and now serves Bennett, is pushing for a Yamina alliance with Yesh Atid. Shlomo has been described by Lapid as “the most brilliant man in the Israeli political system.”

Gafni, who wants to stay on as chairman of the Knesset finance committee, said on Tuesday that the UTJ would rather sit in the opposition with the Likud than be part of a Lapid and Naftali Bennett government, but, brave statements aside, his willingness to meet in public with Lapid is a political milestone with the potential of landing Netanyahu in the opposition while retaining the desired committee chairmanship.

Unlike his right-wing colleagues, MK Gafni has no problem trading horses with the left, as well as with the Arabs. Only last week he was supported by Joint Arab List leader Ahmad Tibi, whose vote blocked an attempt by Israel Beiteinu in the Knesset Organizing committee to wrest the finance chairmanship out of Gafni’s hands. Tibi announced that he would not allow the appointment of anyone but Gafni as the committee’s temporary chairman.

Gafni explained his decision to meet Lapid in a Wednesday morning interview on Kol Barama radio, saying, “I’m talking to Lapid because I was sent to do my job at the House of Representatives and not the House of Morality. I talk to Ahmad Tibi, too. I will not receive dictates from anyone, but that does not contradict the fact that we will go with the right and with Netanyahu.”

His partner at the helm at UTJ, Housing Minister Yaakov Litzman, criticized Gafni on Tuesday for his flirts with the left, and added, “there will be no coalition with Lapid or Liberman. Only with Netanyahu, to the end. We feel gratitude for Netanyahu, and when we have gripes we express them to him behind closed doors.”

As to Bennett’s adviser Shalom Shlomo, he is feared by Netanyahu, who has objected to including him in his face-to-face negotiations with Bennett.

Yedioth Ahronoth reported Wednesday morning that Yamina officials had been taken aback by the intensity of Netanyahu’s attacks on Bennett – with less than two weeks left to form a government. Those officials told Yefioth: “Netanyahu is not working to form a right-wing government, but to prevent the formation of a government headed by anyone but Netanyahu. Netanyahu now wants a fifth election.”

But it appears that Netanyahu may be the only politician on both sides of the aisle who may be shooting for a fifth election – unless you include Shas chairman Aryeh Deri who proposed a special, one-time, direct election for prime minister, which has already used up it allotted amount of oxygen.

Everyone else in Israel’s political system only stands to lose from a fifth round. But this does not mean that the MKs across the board have only one of two options. They could vote in a Likud member as PM after Netanyahu gives up, and establish a solid, 65-member, eight-wing coalition with Sa’ar, Bennett, and the Haredim:

In comparison, a Lapid-led coalition with the Haredim would be much less cohesive ideologically and would likely collapse in short order: 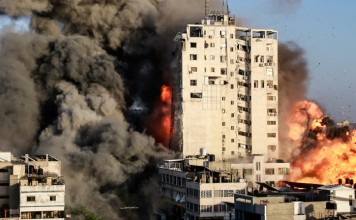