Large Border Police forces arrived Thursday morning at the settlement of Amona and began evacuating the youths who have been maintaining a protest settlement there. The protest sit-in, using two caravans that were brought to the ruins of Amona, came in response to the murders by Arab terrorists of two soldiers and an unborn baby a few weeks ago outside Giv’at Asaf in Samaria.

According to the legal aid society Honenu, police are using extreme violence against the youths and seven teens have been injured. Police evacuated youths from some of the structures by spraying pepper gas inside. Police also threw stones at the youths, and one boy was injured in the head as a result. In addition, Border Policemen threw stun grenades at the youths. A number of youths were arrested.


Several of the injured were evacuated for medical treatment, some of whom were handcuffed. The boys were taken to a police bus, where police reportedly used violence against them and even sprayed them with pepper gas.

The police issued a statement saying that five policemen had been injured from stones thrown by the protesters, and admitted that one civilian was also injured in the stone-throwing. According to Honenu, it was police who threw stones at the youths and several youths were injured as a result of police violence.

The police said that “the forces that came to the scene encountered very severe violence by dozens of rioters who threw stones, torched tires and threw barbed wire at the forces that used crowd dispersal measures.”

Honenu issued a statement saying: “On a regular basis, in order to excuse their actions which are unacceptable in any democratic state, the Shin Bet briefs reporters, such as Roy Sharon on this evening’s Kan news program.

“Whenever, for lack of evidence on the part of the Shin Bet, there is a need to excuse the torture of minors in the Shin Bet dungeons, the Shin Bet starts spreading fake news.

Amona chairman Avichai Boaron issued a statement to the media Thursday morning criticizing Prime Minister Benjamin Netanyahu and comparing Amona to the illegal Arab outpost of Khan al-Ahmar, where Netanyahu has been delaying the evacuation of the squatters despite a clear ruling of the High Court of Justice.

“The prime minister did not evacuate Khan to Ahmar, but unfortunately it was very important to him to evacuate for the second time the Amona farm that was established in memory of the [murdered] baby Amiad Israel.”

“We purchased these lands, about 10 acres, for 6.5 million shekels ($1.6 million),” Boaron said. “All we asked was to exercise our property rights in the land – a basic right granted to every Israeli citizen, but if you are a settler you have no rights.”

Boaron noted that “the prime minister could have, with a single signature in his role as defense minister, permit a deal that allowed us to use our land. Unfortunately, he has not done so and with his own hands brought about this evacuation.” 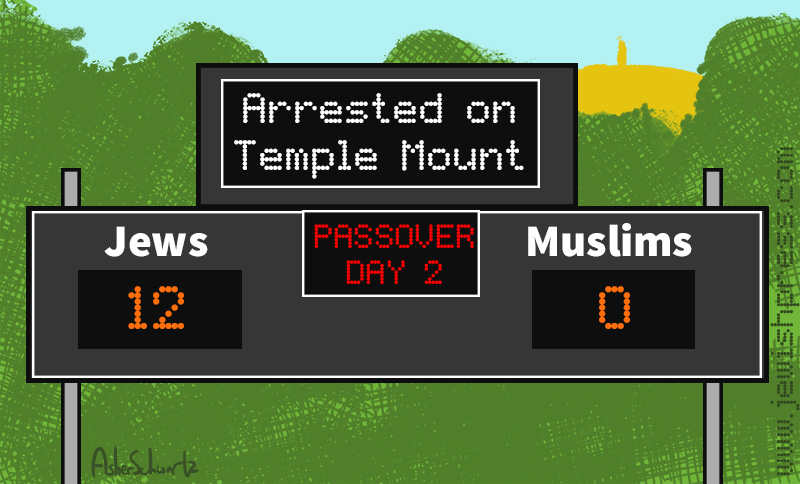 Soccer and Parkour OK On Temple Mount; Muslims Worried About Jews Desecrating Place By Praying There