MK Dudi Amsalem (Likud), speaking from the Knesset podium on Wednesday, attacked Supreme Court President, Justice Esther Hayut, claiming she is racist. Hayut responded with an open letter that opened: “Yesterday I sadly heard the evil words you expressed from the Knesset podium at me and my fellow judges, and not for the first time.”

But wait, before I provide the background to this story and the full text of the Chief Justice’s letter, why not just read what a senior Israeli politician feels about the country’s chief justice:

“What did Mrs. Have to drink? Don’t think we are idiots. Instead of writing nonsense that you yourself don’t understand, just write, Mr. Amsalem, I can’t stand you, I can’t stand the Amsalems and the Makhloufs, and I won’t support you because this belongs to us.

“If Amsalem David cannot petition the court as a Member of the Knesset, as a public petitioner….

“When have you rejected a petition from the ginger heads, and this association, and those over there … all the leftists … and I, an MK, can’t petition?

“You belittle 70% of the nation of Israel. All those whose name does not end in ‘Vich.'”

This is not the first time MK Amsalem has rubbed the “ethnic genie” out of the bottle. But it may be the first time his uninhibited (to choose a mild adjective) attacks have been answered, and then some. But wait, first some background.

On Tuesday this week, the Supreme Court dismissed outright two lawsuits that were filed by MK Amsalem:

The first one was his request to allow a hearing by an extended panel of judges in a petition that had already been rejected in January and dealt with the government’s failure to appoint a permanent director-general of Israel Aerospace Industries (IAI). Amsalem’s petition was rejected originally on the grounds that he did not have the right of standing on the issue.

The second petition the court threw out had to do with Construction and Housing Minister Zeev Elkin. Amsalem asked the court to prevent Elkin from dealing with some issues related to his position for a possible conflict of interests. Moreover, Amsalem petitioned the court to order a criminal investigation against the minister. The judges rejected the petition outright because the plaintiff had not exhausted the proceedings before coming to the top court, and also because former Attorney General Avichai Mandelblit found no criminal suspicion in Elkin’s conduct.

Needless to say, MK Amsalem was livid. Mind you, this was not the first time the Supreme Court rejected his appeals. This was also not his first attack on the Supreme Court. Some two months ago, Amsalem raged against Supreme Court Justice David Mintz for rejecting his petition, telling Reshet Bet radio that Mintz is “a delusional judge. I think he drank a bottle of whiskey that day.”

Apparently, a state of inebriation is a prerequisite for judges to reject MK Amsalem’s lawsuits.

But this time, the court had had enough, or, rather, the court president did. Justice Hayut sent MK Amsalem an official letter, which she leaked to everyone with a Twitter account in Israel, and told him:

“I wanted to tell you David Amsalem – in the transit camp where I was born and in the crowded housing complex where I grew up there were a lot of Amsalems, Makhloufs, Bitans, and Orkavis, alongside Moscovitzes, Hershkovitzes, and Ravitzes. As children, we played together in the neighborhood and studied together in class, and the friendship that grew between us as children lives and breathes to this day because we chose love for mankind and respect for others. That’s how my late grandmother raised me and these were the values that have gone with me all the way.

“I started my career as a judge in the Local Affairs Court in Tel Aviv, 32 years ago, and that’s a role that without the same love for man, every man, cannot be carried out faithfully. So no, there’s nothing further from the truth than to say about me that I do not tolerate the Amsalems and the Makhloufs, and I wonder what’s the source of all the poison and hatred that brings you to say such harsh things about people you do not know at all. And yes – I definitely enjoy drinking a glass of good arak sometimes with family and friends, but it has nothing to do with the judgments I and my colleagues write. These are written in a completely sober state according to the law, and to the best of our legal ability and knowledge – just that.”

Justice Hayut concluded: “We have come a long way in life, you and I – I to the Supreme Court and you used to be a minister in Israel and today a Member of Knesset. I believe that from the place we have been privileged to reach, we—me and you—have a duty to do good, to contribute to unity in Israel, and not to sow division and incitement. Think about it.”

“Mrs. Hayut: if you were a decent woman you would suggest to the Judicial Selection Committee that there be some Sephardic, Haredi, and Ethiopian judges. Second thing: I am no less smart than you, I am willing to sit with you on any subject you choose and let you understand who you’re dealing with. I know when you step on my head and you stepped on my head because you can’t stand what I do. You (the court – DI) are a side in this issue, and you know that as soon as this government is replaced, far-reaching changes will be made at the Supreme Court. You rejected three of my petitions that day. Nothing is done randomly, and you doubled down and wrote nonsense.”

Finally, MK Amsalem mentioned three petitions. So, for the record, here’s the third one:

On January 3, Amsalem filed a defamation suit against several media outlets, over a report that he, Amsalem, said that “leftists should be put in pens,” which he claimed caused him damage “that was so exacerbated that it could no longer be stopped and overcome.”

The suit also demanded the defendants recant the report, and the court issue a restraining order on future publications of the same defendants containing defamation against Amsalem. 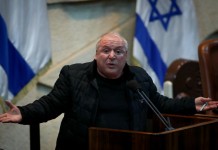